Make the Plane of Fire a plane of evil

Burn the world to the ground

Archomental
Imix, also known as the Prince of Evil Fire Creatures, is the evil archomental of fire, a minion of the Elder Elemental Eye, and a major antagonist of Dungeons & Dragons franchise.

He was a primordial older than the world itself, being the arch-rival of Zaaman Rul and Olhydra, and the worshipped deity of the Cult of the Eternal Flame led by Vanifer.

Being a creature that is thrist on violence, evil and flames, Imix's history on the Material Plane was concentrated mostly on the world of Oerth, where his alliance with the Elder Elemental Eye caused him to send an aspect of himself to the Temple of Elemental Evil. However, that aspect was destroyed and Imix immediately withdrew his support.

In his natural state, Imix appears as a gigantic abomination made of pure blaze. He is prone to tactics and is very creative, being the creator of several elemental creatures that is associated with fire elements.

However, Imix's arrogance and short-fused nature had proved to be his greatest weakness. He easily became frustrated when things didn't go according to his plans, and he would destroy anyone who refused to acquiesce to him.

In the past, Imix attempted to schemed against Kossuth, the Lord of Flame, but it was failed. Kossuth was wary of Imix, but did not see him as a potentially critical threat.

Imix is a thirty foot tall pillar of flame. His face consists of two black pitted eyes and a mouth.

Imix is cruel, wrathful, envious, vain, and passionate. He is filled with a desire to burn everything in his way. He particurily enjoys burning livestock, animals, and people. Even his own followers are not safe from his burning hunger. Even if they over him sacrifices and gifts.

Imix is followed by several groups of fire cultists and creatures associated with fire, such as fire elementals, efreets, fire giants, magmins, salamanders, firenewts, and even red dragons. His modern day's cult worship had started when Vanifer, a Tiefling outcast, created the Cult of the Eternal Flame's modern incarnation and carried on Imix's plan to take over the region of East Gauntylgrym, building an area known as the Fiery Pit there.

Vanifer planned to set the awakening Maegera so that she can use her power to create a Devestation Orb and set the entire Sword Coast on fire. However, Vanifer was stopped by the combined forces of dwarves, Neverwinter and the adventurers, though she managed to escape and hid somewhere else, planning to strike back once more. 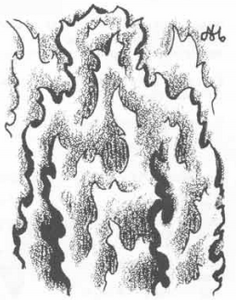 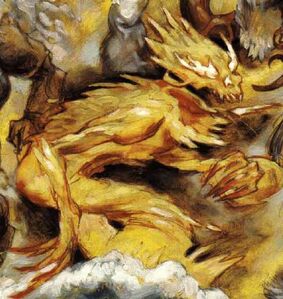 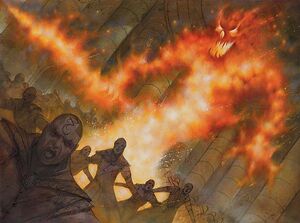 Imix and his followers 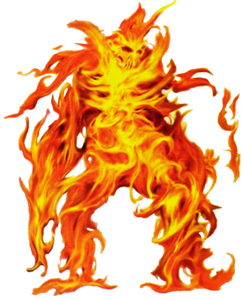 Add a photo to this gallery
Retrieved from "https://villains.fandom.com/wiki/Imix?oldid=3889868"
Community content is available under CC-BY-SA unless otherwise noted.