Defeat Geralt of Rivia (all failed).

Imlerith is one of Eredin's three generals of the Wild Hunt and is one of the two secondary antagonists of The Witcher 3: Wild Hunt. He is a powerful, ruthless, and manipulative warrior. Together with his king and his co-generals Caranthir and Ge'els, he seeks the elder blood of Ciri in order to save their homeland.

Geralt knows Imlerith from his time with the Wild Hunt and has respect for the elf's strength.

When the Wild Hunt arrived, Imlerith met the Crones whom he ordered to keep an ear out for Ciri. The witches took his order literally as they hung human ears throughout Crookback Bog.

During battle of Kaer Morhen, Geralt spots Imlerith in the woods surrounding Kaer Morhen. Recognizing him as one of the Wild Hunt's generals, Geralt stops his companions from engaging him directly. Instead, he tries to have Triss strike down Imlerith with a firestorm but Triss, who is occupied fighting, is unable to do so. Imletith arrives at the castle gates which Geralt closes just in time. He tries to bash in the gates with his mace but is unsuccessful.

Eredin and Imlerith are later brought into the castle by Caranthir who also creates a powerful snowstorm which freezes everyone inside the castle except Ciri and Vesemir. Vesemir tries to bring Ciri to safety but is attacked by Imlerith who rams him with his shield. While Eredin tries to drag Ciri into a portal, Imlerith fights and overpowers Vesemir. Imlerith is about to beat Vesemir to death but is stopped by Eredin who realises that Ciri would surrender with Vesemir's life at stake. Realising that Ciri is about to yield, Vesemir grabs a dagger from his belt and stabs Imlerith in the side. Furious, Imlerith snaps Vesemir neck and kills him. This causes Ciri to unleash her powers with a powerful scream. Overwhelmed by Ciri's powers, Caranthir opens a portal through which Imlerith stumbles, successfully escaping Kaer Morhen.

He later attends the Crone's sabbath as a special guest. He is seated on a throne on top of the mountain, accompanied by succubi. After finding out that Imlerith would be present at the sabbath, Ciri tells Geralt and the two head to Velen to avenge Vesemir.

After sending Ciri to fight the Crones, Geralt faces Imlerith on the mountain. A battle ensues in which Geralt is eventually overpowered. Imlerith grabs him and, like with Vesimir, lifts him into the air with both hands. However, Geralt uses the Igni sign to send a stream of fire at Imlerith, boiling him alive in his armor. Imlerith drops Geralt and desperately tries to remove his helmet. He eventually succeeds, revealing the charred remains of his face. Geralt then grabs Imlerith's mace and smashes the elve's face in, avenging Vesemir.

Imlerith - a general of the Wild Hunt and a frequent guest of Geralt's nightmares - had been chasing Ciri for quite some time, striving to deliver her to his ruler, Eredin.

This powerful and brutal warrior had fought in the countless battles and campaigns for conquest waged by the Aen Elle in other worlds. He prized physical confrontation above all else, seeking out direct, bloody skirmishes where opponents pit their strength, agility and training against each other in a contest to the death. 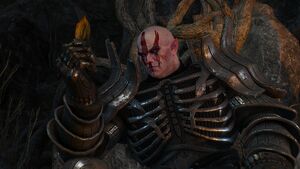 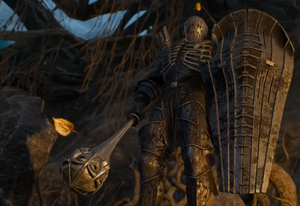 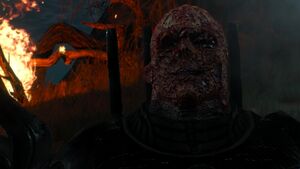 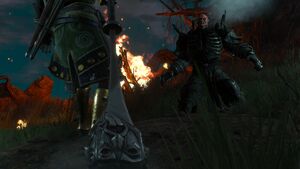 Retrieved from "https://villains.fandom.com/wiki/Imlerith?oldid=4129352"
Community content is available under CC-BY-SA unless otherwise noted.