Immorticia is one of the secondary antagonists of the mobile game Plants vs. Zombies Heroes. She is a zombie witch who leads Beastly and Brainy classes.

Not much is known about Immorticia's past, and who is her zombie fighter counterpart.

In Immorticia's introduction comic strips, she can be seen being chased by Green Shadow, Solar Flare, and Grass Knuckles in a graveyard, until she unleased her magic and summoned a wave of Zom-bats to scare them away.

In Beware the Bewitching Zombie, when a group of plant Trick-or-Treaters arrived at Immorticia's manor, she summoned the zombies to kidnap them. Hearing this, Green Shadow, Grass Knuckles, and Nightcap came for rescue. They had a fight until the Trick-or-Treaters helped the Plant Heroes defeating Immorticia with toilet paper rolls.

Immorticia appeared in Menace on Molten Mountain! alongside Super Brainz, Neptuna, and Impfinity, who were ready to fight Captain Combustible with his boosted Peashooters army. They had a battle with him until Super Brainz used Neptuna's tank to extinguish his fire.

Immorticia also appeared in Nightcap's introduction comic strips with The Smash and Rustbolt, who were preparing a group of plants. Seeing this, Nightcap came to the rescue by summoning his mushroom team.

Immorticia returned in Plants vs. Zombies 3 as a member of the Brainiacs. She pilots an organ that moves around, summoning zombies, and she uses her magic wand to target plants with her electric beams.

Immorticia made her introduction and manipulated the plants to side with her by getting rid of her rival, Ballpark Frank. She then kidnapped Crazy Dave while the plants were distracted to find the hot sauce ingredients. But despite this, she was exposed by the plants and had Dave returned safely.

Being a witch, Immorticia wields her wooden wand to cast magic spells, such as necromancy. In Plants vs. Zombies 3, Immorticia pilots her organ-themed robot, with herself moving around, summoning zombies, and blasting electric beams at plants. 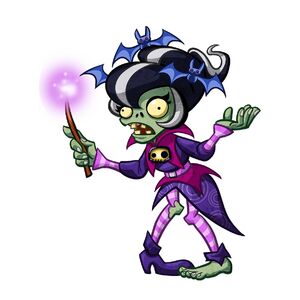 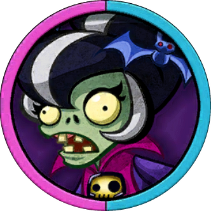 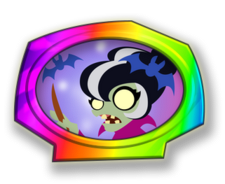 Witch's Familiar
Add a photo to this gallery

Retrieved from "https://villains.fandom.com/wiki/Immorticia?oldid=4145318"
Community content is available under CC-BY-SA unless otherwise noted.