Imperial Starfleet of the Terran Empire

The Imperial Starfleet (Starfleet) is the naval forces of the Terran Empire and an antagonistic faction in the Star Trek mirror universe.

Under the direction of the Emperor, Starfleet conquered much of the Alpha Quadrant by the 23rd century, subjugating or destroying all those it came across. These included Klingons, Andorians, Vulcans, Denobulans, Halkans, and numerous other species. When Starfleet was not busy conquering new territory they were suppressing the rebellions which invariably occurred due to the despotic and oppressive nature of the Empire. Starfleet members would not hesitate to commit genocide when dealing with resistance.

Officers in the Imperial Fleet advanced in rank through assassination and employed their own personal henchmen amongst the enlisted ranks. Officers who advanced by assassinating their superiors included Sylvia Tilly, Hoshi Sato, Christopher Pike, James T. Kirk, and Mr. Spock. Officers who attempted assassination of superior officers included Pavel Chekov, and Wesley Crusher - both of whom failed in their attempts.

While successful assassination was rewarded with a subsequent rise in rank, it was still a dangerous prospect due to the reprisals that might result from the personal guard and other operatives of the deceased. It was considered especially dangerous if such persons were Vulcans.

Discipline on board Starfleet vessels was brutally harsh. Members were subjected to agonizers for the more minor offences, which was quite painful in itself. More serious offences would result in the member being placed in an agony booth, which tortured its victims. Such booths could slowly torture an individual to death if they were used for what was called the "full duration."

In the mid 23rd century, beaming individuals into space was a preferred method of execution in the fleet.

In the 22nd century the ISS Enterprise (NX-01) had been participating in efforts to suppress the rebellion against the Terran Empire. The fight had not been going well for the Empire. In that year Jonathan Archer, first officer of Enterprise, learned that the USS Defiant from the prime universe had crossed over and was being reverse engineered by the Tholians. Archer led a successful mission to capture the Defiant, although the Enterprise was destroyed by the Tholians. The acquisition of the Defiant helped Starfleet defeat the rebellion, and led to Hoshi Sato seizing power as Empress after assassinating Archer.

Much of the information on the Defiant was highly classified, with copies of the data stored on Imperial ships being heavily redacted. In the 23rd century Emperor Philippa Georgiou was one of the few people who knew of the prime universe and the United Federation of Planets.

During the mid 23rd century an alliance of Vulcans, Klingons, and Andorians continued their rebellion against the Empire. Starfleet vessels such as the ISS Charon, Shenzhou, Discovery, and Cooper participated in fights against these rebels.

After the 2267 crossover, Spock began a series of reforms to make the Empire a less aggressive and more benevolent organization. Due to his reforms the Empire was dissolved in favor of the Terran Republic in the late 23rd century. However the massive disarmament left Starfleet unable to repulse the Klingon-Cardassian Alliance, and Starfleet was defeated in the 2290s.

A successful rebellion in the mid 24th century led to the Terrans freeing themselves from decades of enslavement. Learning from their past mistakes they did not reconstitute either the Empire or the Imperial Starfleet, but instead created a new democratic Galactic Commonwealth and a fleet to support the new government.

After being framed by Kirk for treason, Spock was executed in 2279. As a result his reforms never got off the ground. Starfleet survived in to the 24th century, and fielded vessels such as the ISS Enterprise (ICC-1701-D).

In the Star Trek Online permutation of the mirror universe, the Empire was resurrected after the successful Terran rebellion of the mid 24th century. By the early 25th century, Starfleet had been reconstituted and helped the Empire once again become a major power in the Alpha Quadrant. 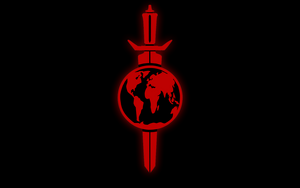