Impfinity is one of the secondary antagonists of the mobile game Plants vs. Zombies Heroes. He is a Zombie Hero of a basic Imp, who leads Crazy and Sneaky classes.

Not much is known about Impfinity's past. However, it is revealed in his introduction comic strips, he caused mischief in Dr. Zomboss's lab instead of helping him doing his chores.

Impfinity appeared in Impfinity's Wild Ride, as he can be seen causing mischief in the theme park. This caused the Plant Heroes to stop him. However, as seen at the end of the comic strips, Impfinity managed to escape through a rollercoaster.

In Battle at the BBQ, after Super Brainz turned the Plant signal on, Green Shadow checked out what happened, and suddenly interrupted the party. Super Brainz, The Smash, and Impfinity had a fight against Green Shadow, until The Smash tossed her into Brain Freeze's jelly.

In It Came from the Greenhouse, Super Brainz, Impfinity, and Brain Freeze had a fight against Chompzilla, after a horde of invading zombies interrupted her sleep. Brain Freeze defeated her by freezing her mouth.

Impfinity also returned in KO at the OK Arcade alongside Super Brainz to have a game match against Solar Flare in the arcade.

During the events of A Fight to the Finish Line, Impfinity cheated during the race against Grass Knuckles by using his clones.

In Menace on Molten Mountain, Super Brainz, Impfinity, Neptuna, and Immorticia was being attacked by a group of Peashooters who were empowered by Captain Combustible. To defeat him, Super Brainz used Neptuna's tank to extinguish his igniting torch.

Impfinity also made his appearance in Mini-Golf Standoff, alongside The Smash and Brain Freeze stopping Wall-Knight from interrupting a golf game. Brain Freeze defeated Wall-Knight by using his golf stick to hit him in a hole.

Impfinity did not make a direct appearance in this game. However, his clones' almanac entry mentioned him.

To produce mischief, Impfinity can create clones with his belt. His clones share his mind, and they can shoot a blast from their belt. If the prototype gets hurt, the clones share the pain. 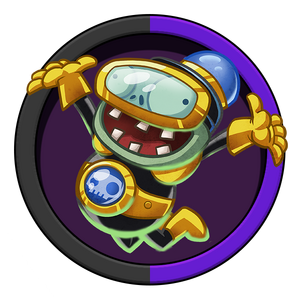 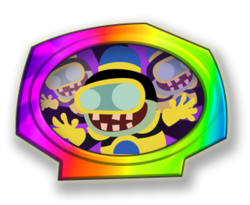