Talking trash to others.
Picking on Calumon.
Scaring people.

Digivolve on his own.

Mischievous Trickster
Impmon is a troublemaking Rookie Class Digimon and one of the main characters in Digimon Tamers. Later in the series, he digivolves into Beelzemon.

He was voiced by Derek Stephen Prince.

Impmon is a Rookie Class Digimon that resembles a small purple humanoid imp creature with a tail and large pointed ears. He wears a pair of red gloves and a matching red bandanna, and a grinning yellow face on his belly.

Impmon is mostly a mischievous, rude, trash-talking creature. He loves to pull pranks on anyone, and mostly scare humans.

After Impmon ran away from his two partners, Ai and Mako, he now thinks humans are much more of a nuisance to him. When confronted by one of the Devas, Indramon, he wants to pick a fight with him in an attempt to Digivolve, but ends up being badly defeated by the horse Deva. When arriving in the Digital World, he became more bitter when he met the dog Deva, Caturamon, and offered his wish to become Beelzemon.

After Beelzemon was drained of his energy from the Chrysalimon, Impmon then realizes he was very remorseful and wrong for running away from Ai and Mako. When returning to the Real World to redeem himself from his previous actions, he reunites with his partners, Ai and Mako, and allowed them to give them a second chance. Later on, during the battle with the D-Reaper, Impmon redeems himself to help the Tamers. After the D-Reaper was defeated in the end, Jeri forgives him for killing Leomon before departing back to the Digital World.

Impmon was partners with two kids named Ai and Mako, but he ran away because they were always treating him like one of their toys. So he thought that all humans are like that. He causes nothing but pranks and always claims that he is the best. All Impmon wanted to do was to Digivolve without the help of humans. He tries to prove himself by fighting Indramon but suffers a devastating and painful defeat. Being humiliated and having his ego crushed, Impmon readily accepts the Deva Caturamon's offer. He then Digivolves into Beelzemon. Even with all the power, he acquired he still felt empty because of him killing Leomon. He decided to find Ai and Mako to tell them he was sorry he left. When he learned about the D-Reaper, he decides that he needs to help the Digimon Tamers as Beelzemon even though the Tamers don’t trust him, but he redeems himself by destroying the first agent of the D-Reaper. He saves the Digimon Tamers regained his trust from them and they apologize to him in return. In the final episode, even Jeri forgives him for his previous crimes before departing back to the Digital World with the other Tamers Digimon.

Impmon is not technically a villainous character, but he has performed several wrongdoings that made him an anti-hero. Such as pulling pranks, trash-talking, terrorizing people, but the worst thing he has done was making a deal with Caturamon and became Beelzemon, and murdering Leomon when he was Beelzemon, which traumatized Jeri.

Impmon is a Rookie-leveled Digimon with a demon childlike appearance. He looks forward to deceive the opponent in many ways, from his almost adorable and impressive appearance to his collection of practical jokes. When Impmon appears, electrical appliances around him temporarily corrupt and manipulative, and some say that when these gadgets freeze up and become obsolete, it may be because Impmon has played one of his tricks on them. This Digimon loves evilness and bad-hearted people, but he prefers to confront stronger opponents with his bold and brash attitude. Despite this, however, he feels lonely deep down and also has unpleasant and disagreeable aspects about him. He likes to attack the opponent with "Summon", where he summons the elementals of fire and ice. His special attack is "Night of Fire", where he attacks the enemy with a dark flame. 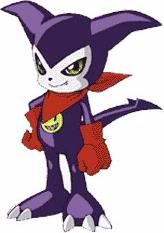 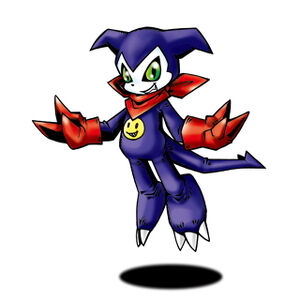