Alien from the planet Poppup

The Impossible Man, or more commonly known as Impy, is a character in the Marvel universe. He is an alien from the planet Poppup. Impy is known to have the ability to transform into anything he thinks of, teleport, and some ability to warp reality. Though he is not an antagonist towards any of the Marvel heroes, he does have a tendency to cause pranks and mischief around any of the heroes, (but mainly towards the Fantastic Four). Impy has even helped some of the heroes from time to time. But despite him trying his best to help the heroes, Impy's "helping" can sometime lead towards even bigger problems. And there are times where Impy tries to run away from the problem that he caused and have the heroes fixed the problems for him, though the heroes do managed to catch him and force him to fix the problem on multiple occasions.

The Impossible Man was born on the planet Poppup, and is a member of a race of beings who reproduce asexually and could alter their molecularly malleable bodies at will to temporarily assume any shape imaginable. Poppup was a particularly harsh and dangerous world, and the Poppupians' shape-changing abilities enabled them to survive its many perils. By the time of the Impossible Man's birth, the Poppupians had evolved a collective consciousness, linking the minds of the entire race in a group mind. Hence, Poppupians have no names because they were, in effect, all the same being.

Endowed with a slight mental variation that permitted him a degree of individual thought, the Impossible Man acted upon the boredom that his entire race experienced. He did so by transforming himself into a space vessel and leaving Poppup. Eventually he arrived on Earth, and found the planet to provide a great source of amusement potential, especially since he had shape-changing powers and ordinary human beings did not. It was during this first visit to Earth that he first met the Fantastic Four and that he was dubbed "the Impossible Man" after the Thing commented on how the absurd ways that the alien used his shape-shifting powers made him "impossible." The Impossible Man made a major nuisance of himself until the Fantastic Four pretended to be bored with him, and persuaded other people to act the same way. Convinced that Earth was dull, the Impossible Man departed.

The Impossible Man accompanied the Fantastic Four back to Earth, where he became fascinated by Earth's popular culture. At first he became jealous that he did not have his own comic book and went on a rampage at the Marvel Comics offices until Stan Lee agreed to have at least a single comic featuring the Impossible Man. Observing the feelings of the Thing and his then-girlfriend Alicia Masters for each other, as well as the emotions of others, the Impossible Man learned the human concept of love. Lonely for someone else like him to share love with, the Impossible Man cloned himself a mate, the Impossible Woman, from his own body. The two aliens then left Earth to explore the frontiers of love and to recreate the Poppupian race.

The Impossible Man reappeared to defend Earth from the Chaos King during the Chaos War, and was brutally slaughtered by the dark god for this.

The Impossible Man's personality is one of a school boy who will go out of his way to prank other people and make them look stupid.

Impossible Man is a shape-shifting alien from the planet Poppup. He travels to Earth and the first people he meets up with are a gangster named Grogan, and his accomplices who have just robbed a bank. The alien tells them that he is from the planet Popup on vacation and has no name. Since he can do just about anything, Grogan dubs him the Impossible Man. Taking advantage of his ignorance of Earth culture, Grogan plans to use Impossible Man to rob every bank in New York. The next day, they successfully steal a large amount of cash from a city bank. The Fantastic Four are alerted to the super-powered theft by the police, and track Impossible Man and his acquaintances to a local restaurant.

The Impossible Man is on the run from Super Skrull. Johnny agrees to protect him if he tells Lockjaw to teleport him to the Great Refuge to see Crystal.

The Impossible Man is brought to Earth by one of Reed's space probes and immediately starts causing trouble for everyone. In the end, the Fantastic Four convince Impossible Man that Earth isn't as fun as he is.

In the episode "Tremble at the Might of...MODOK!", Impossible Man appears at the Supervillain Big Heads Convention held by MODOK.

At the end of the credits, Impossible Man was with the Avengers at the shawrama restaurant asking what is shawrama anyway before teleporting them and himself to an unknown place.

The Hulks' biggest fan Impossible Man also proves to be their biggest problem when he summons the giant dragon Fing Fang Foom to battle them. 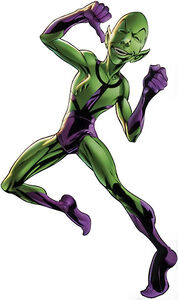 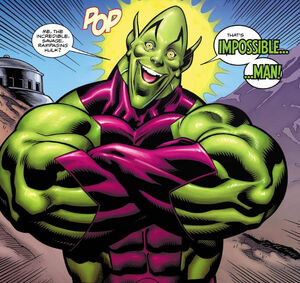 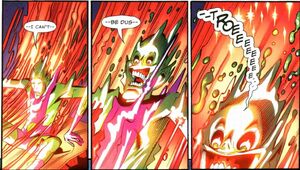 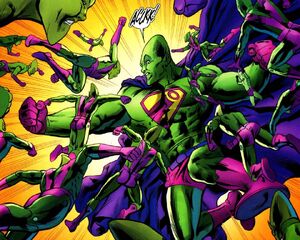 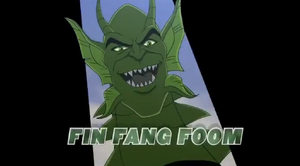