Taking over other people's identities

Take over Dan's life and live it as a nice person (failed).

Get revenge on Dan for having him sent to Jail by driving him Crazy and having him arrested (partially succeeded).

Impostor Dan is an antagonist in the animated series, Dan Vs.. He first appeared in the episode "Dan*" and returned as a telemarketer in "The Telemarketer".

He was voiced by John C. McGinley who also portrays Edgler Vess in "Insanity," Metallo in "Superman/Batman: Public Enemies," Doug Sisk in "The Animal," MacGruder in "On Deadly Ground," Dr. Diente in "American Dragon: Jake Long," and Whammer in "WordGirl."

He stole Dan's identity and quickly won over Chris when he baked him a strawberry rhubarb pie. Besides his identity theft, he seems to be a kind man, and even cleans Dan's apartment for him. Mr. Mumbles seems to like him, though this may be due to him looking like Dan. His true name is unknown. He seems to be a good cook, which may be because he was a cook the last time he stole an identity. He is eventually arrested by the police when the real Dan purposely missed his court date.

He is said to call the titular character every five minutes and is not revealed until Dan, accompanied by Chris and Elise, arrive at his work site (one Chris had partaken in work as well before its own outsourcing.) Here the impostor seems slightly more sociopathic than his previous appearance in the show. This may be due to spending the last six months in prison. Later, Elise happens upon his 'home address', later revealed to be apartment residing over his own, in which he keeps a single phone, a trap door, and the means to release high amounts of sleeping gas. It is shown once again his ability to infiltrate Dan's home. This was also alluded to earlier in the episode when the impostor hid several cell phones in both Dan's apartment and car. Here we see the Impostor now disguised in a cat suit vaguely similar to Mr. Mumbles. This appears to be another display of abnormality in his mental state, but was most likely just another method of having Dan sound even more deranged than ever when he recounted the tale. Also in this episode we see him wearing Chris's clothing and impersonating him for a few moments. At the end of this episode the impostor achieves his goal and seems to have retired to a lakeside cabin in the forest. However, Dan said he is spending six weeks in prison, unlike him when he spent longer (six months). He may not be happy about that. It means his goal is not yet achieved, or at least not completely.

The Imposter is shown to be a selfish, loathsome and overbearing jerk. Although he is pretty friendly to most people, he seems to show a little bit of remorse for his actions. Besides the identity theft, he seems to be a kind man who cleaned Dan's apartment. Mr. Mumbles seems to like him, though this may be due to him resembling Dan.

He is a slender man who resembles Dan with blue eyes, black hair, thick black eyebrows, and a black soul patch

In the episode he debuted on, he was wearing the same thing Dan always wears: a black T-shirt with the white-colored word "JERK" on the front, dark blue jeans, and black shoes.

After leaving the jail he went to at the end of the debut episode, he wore the exact same clothes Dan wore minus the "JERK" shirt. Instead of wearing Dan's "JERK" shirt, the Imposter wore a light blue t-shirt with a pocket and a dark brown necktie with brown stripes. 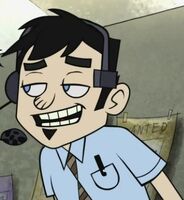 The Imposter as a Telemarketer.

The Imposter dressed up as Dan's cat, Mr. Mumbles. 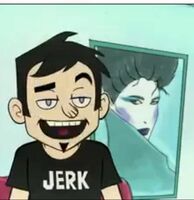 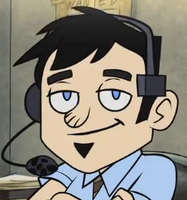 The Imposter revealing himself as the person troubling Dan with telemarket calls. 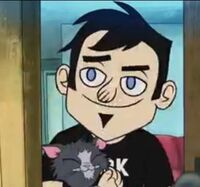 The Imposter stealing Mr. Mumbles from Dan, yet she likes him (probably due to his resemblance to Dan.

The Imposter fighting with Dan while at his telemarket office. 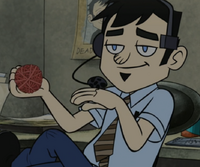 The Imposter playing with a ball of yarn. 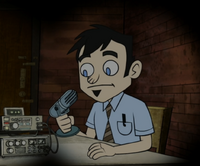 The Imposter at his home, trying to call Dan again. 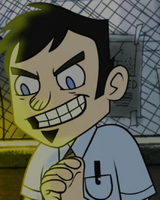 The Imposter last seen as a fisher.
Add a photo to this gallery

Retrieved from "https://villains.fandom.com/wiki/Imposter_Dan?oldid=3629664"
Community content is available under CC-BY-SA unless otherwise noted.