Villains Wiki
Register
Don't have an account?
Sign In
Advertisement
in: Twin/Clone, Partners in Crime, Serial Killers,
and 42 more
English

The Impostors are, depending on the point of view, the villainous main protagonists or the main antagonists of the 2018 video game Among Us.

Doppelgangers of the friendly Crewmates found among their group, players who are selected to be Impostors have the task of killing all players that are not them or another Impostor, either through direct murder, a dangerous sabotage that is unable to be stopped, or through incriminating their fellow players.

The creation of Among Us started to develop late in the 2017. The inspiration of the game was the 1980's social game Mafia, and the 1982 movie The Thing, in which one of their team-members get infected and transformed into a monster-like being by The Thing, while the other team-members are trying to detect the infected one.

Ultimately, the game got released on June 15, 2018, with it going under the radar of many until July 2020, when a Twitch-streamer known as Soddapopin played the game on his stream, popularizing it rapidly on the internet and giving Among Us its spotlight. Once the game started to spread in it's popularity, famous YouTube stars such as PewDiePie, KSI, Pokimane, Ninja, Markplier, and many more have played it, causing the game to go fully main-stream and even winning the "Best Mobile Game" and "Best Multiplayer Game" in that year's Game Awards. Even in 2022, the game has been for most of its time mainstream, with many actively playing to this day.

Within every match in Among Us, there can be anywhere from one to three Impostors, with each sharing the same goal of killing everyone who is not one of them. Due to this, instead of having the ability to complete tasks, they have a variety of other abilities they can use in an attempt to end the lives of their foes. Of course, their main ability is to kill anyone near them, by either shooting out their barbed tongue from their mouth (located in their midsection), snapping their neck, or simply using a knife or pistol.

Alongside this, they have the ability to either cause certain objects to malfunction (with effects ranging from a critical sabotage causing the Crewmates to die instantly if not fixed, obscure tasks by messing with communications, causing the lights to break down to allow the player to have an easier time killing or escaping under the cover of darkness, or shutting doors), hide in or move across vents for easy movement options, and having the usual ability to report bodies and use objects to reduce suspicion around them.

Once a body has been discovered or the emergency button is pressed, the usual meeting begins, with players meant to use the time to discuss on their knowledge or suspicions regarding their suspects and vote those they deem to be likely an Impostor out. As an Impostor, a common tactic is to pin blame on a Crewmate or falsify a testimony in order to have an innocent be voted out. If an Impostor themselves is voted out yet another Impostor/other Impostors remain, the ghost of the Impostor is still able to sabotage machines from beyond the grave, although they lose the ability to kill. Impostors can also report bodies, although these "self-reports" are very risky.

The Impostors win if the amount of surviving Crewmates ever equals their numbers or if a critical sabotage such as a reactor or O2 failure is not fixed, and they lose if all of them are voted out or if the Crewmates complete all of their tasks before the stated Impostor win conditions.

As the Shapeshifter, an Impostor is able to change their appearance into an exact mimicry of any player in a game, allowing them to better incriminate other players. However, this strategy isn't foolproof, as shapeshifting resulting on bits of tentacles falling to the floor where they transform (serving as a visual warning to other players on their existence), other players can see the transformation as it is going on if they can see the player transforming, and the transformation itself is temporary by default. The color of the egg-like shell surrounding the shapeshifter during any transformation is also always the same as their default color.

Main article: Egg (Among Us)

In Fall Guys, while normally a costume of the Crewmate, the costume for said Crewmate will shift towards its Impostor-inspired variant, showcasing its large teeth in its mid-section and a cracked visor.

Due to it's rapid popularity in 2020, the Impostors and the game have became one of the biggest memes during that period of the internet. People have uploaded their memes of Among Us allover the internet. The memes are mainly aiming at the misspelling of the games name as "Amogus", and the word "Sus", for being suspicious of a player being the impostor. There have been also memes of real-lie objects looking-like the Impostors, like a trash-bin which resembles the Impostor. The music of the game has also been used in numerous memes, and has been remixed multiple times. 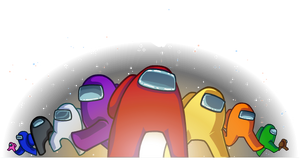 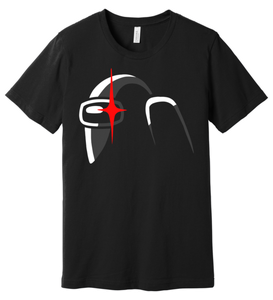 An official Among Us shirt featuring an Impostor. 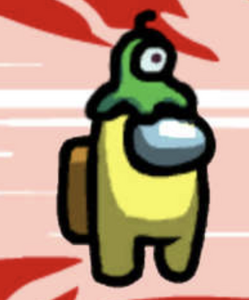 An Impostor snapping its victim's neck.

An Impostor stabbing its victim to death.

An Impostor shooting its victim in the back of the head.

An Impostor stabbing its victim in the face with it's spear-like tongue.

An Impostor disintegrating its victim with a laser blast using the Right Hand Man outfit. 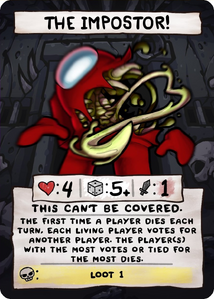 The Impostor's monster card in The Binding of Isaac: Four Souls. 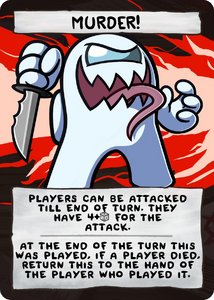 An Impostor featured on the "Murder!" item card in The Binding of Isaac: Four Souls.