Imps of hell
Imps of the devil

Folklores around the world

Playing pranks as they are talented pranksters

Mischievous Tricksters
Imps are small mischievous demons or fairies from varied folklore and mythology as well as some folk religions.

They are considered tricksters and troublemakers rather than outright malevolent and are often portrayed as small in size, often seen as one of the weakest (and/or lowest-ranking) demons in the infernal hierarchy, they are nevertheless a very popular creature with innumerable stories and legends to their name.

Imps are similar to goblins in their fondness for playing practical jokes on people and tormenting mortals for their own amusement, they were also once believed to be the Familiars of haggard witches and devil-worshippers - capable of taking the form of small animals.

While their pranks were harmless, if not annoying most of the time, some could be upsetting and harmful, such as switching babies or leading travellers astray in places with which they were not familiar. Also Imps may not be outright malevolent, but their behaviors are described as being wild and uncontrollable.

In some cultures, Imps and Fairies are considered the same beings: both sharing the same sense of free spirit and enjoyment of all things fun (both creatures are fond of pranks and misleading people).

It was later in history that people began to associate fairies with being good and imps with being malicious and evil. Most of the time, the pranks were harmless fun, but some could be upsetting and harmful, such as switching babies or leading travellers astray in places with which they were not familiar.

In lighter sides, behind their annoying pranks Imps are often portrayed as lonely little creatures, always in search of attention. They often use jokes and pranks as a means of attracting friendship, which often backfire when people become tired or annoyed of the imps' behaviors and driving imps away instead.

Even if imps are successful in getting the friendship they seek, they often still play pranks and jokes on their friends: whether they do that out of boredom or simply because that is the nature of Imps remains unknown.

Being associated with Hell and fire, Imps take a particular pleasure playing with temperatures. Imps are also regularly seen as tempters and a popular image has appeared in fiction of a shoulder imp (or tiny devil).

Shoulder imps are depicted as sitting on the shoulder of a character and tempting them to do evil, in some superstitious tales imps were one of the many evil spirits believed to tempt people (in the imp's case via whispering into people's ears as they slept). Imps can be found in art and architecture throughout the world, often hidden under the eaves of a church or the foot of a ceramic cup, so they can only be found by the most observant of people.

Imps are often depicted as small demons, with horns, sharp teeth, pointy ears, a tail and sometimes a pair of bat-like wings. 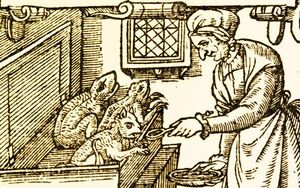 An old woodcut picture depicts a woman (possibly a witch) feeding imps.
Add a photo to this gallery
Retrieved from "https://villains.fandom.com/wiki/Imps_(folklore)?oldid=4104230"
Community content is available under CC-BY-SA unless otherwise noted.