NOTE: This article is about the incarnation of Incubus from the DC Extended Universe. The mainstream version can be found here: Incubus (DC).

Pleasing his sister and causing destruction

Become a deity alongside his sister.
Enslave all of humanity (all failed).

Incubus is the secondary antagonist of the 2016 film Suicide Squad.

He is a nefarious mystical entity who is the brother of the Enchantress. After his sister had evaded apprehension from from A.R.G.U.S., she awakened her brother Incubus in Midway City. Thereafter she createed a weapon of mass destruction to destroy the forces of men so that she and her brother can be worshipped by humanity once more. As such, Incubus attempts to keep intruders away from her lair. Ultimately, however, Incubus is killed by combined efforts of Lt. Edwards, Killer Croc and El Diablo.

The character is portrayed by Alain Chanoine in his first antagonistic role.

Incubus and his sister enchantress were once worshiped by an unspecified South American culture. The two had become trapped in totems and left in a temple for nearly 7 thousand years. When Dr. June Moore, an archaeologist, went cave climbing, she found the totem of Enchantress and opened it, becoming possessed by the witch. Incubus' totem remained behind and was eventually found by Amanda Waller.

After Enchantress, who is controlled by Amanda Waller through her heart, escapes from Waller, she attempts to get her heart back. As she is unable to do so, she steals the totem containing Incubus from Waller and teleports to Midway City. There, she ambushes an unsuspecting businessman called Gerard Davis in a metro restroom and opens the vial, creating a host for her brother. The man, now Incubus, falls to the floor and is embraced by his sister. Incubus is confused at first, asking where they are. Enchantress reveals that they are still in the same world but that much time has passed. She also reveals that the two of them are no longer seen as gods by humanity as the people worship machines now. Enchantress claims that she will build a machine to destroy all humans. She tells Incubus to build his strength by feeding on the humans and tells him to wait for her return.

After Enchantress is gone, the man walks out of the restroom and onto a platform. There, he eventually collapses onto the ground. Shocked bystanders, including a policeman and a physician, attempt to revive him but are suddenly attacked by tentacles sprouting out of the man's body. Three people are grabbed by Incubus, who then uses the energy of the metro tracks to fuse into his immortal form. He then continues slaughtering the people nearby. After clearing the station, Incubus awaits his sister's return. When she teleports into the room, Incubus watches her fall to the ground, severely weakened as Waller is attacking her heart for her betrayal. Before Waller can kill her however, Incubus heals her with his own energy, causing her to transform into a more god-like figure. Incubus then inquires after her heart but Enchantress merely states that she will get it back. With Incubus' shared power, Enchantress then starts building her machine.

While Enchantress builds the machine, Incubus effectively keeps the military away from their location, violently grabbing soldiers with his metal-energy-tentacles and snatching their Humvees and helicopters into Enchantress's blue energy beam to provide material for her machine. Incubus then rounded up the U.S. Army soldiers he disarmed and took them as prisoners of war, then Enchantress seduced the soldiers who then became rocky-skinned faceless monsters who now obey her.

Later, after the Squad has found their target, Amanda Waller, and brought her safely to an escape helicopter, Incubus rips down that helicopter as well. He approaches the wreckage and drags Waller out of it. He then brings his captive to his sister who gets her heart back from Waller.

When the Squad arrives to save Waller, Incubus battles El Diablo, who uses his powers to turn into a demon-like figure equaling Incubus in size. He also almost kills Captain Boomerang but is saved by Katana who cuts his arm off. Incubus merely regrows another arm and resumes the battle. Meanwhile, Killer Croc and a group of Navy SEALS are diving through the flooded tunnels below and attach a bomb underneath Enchantress' lair. During his fight with Incubus, El Diablo deliberately pressures Incubus into the corner where the bomb is located. When Incubus, who has arrived in the corner, takes down El Diablo and starts strangling him, El Diablo urges Squad leader Rick Flag to detonate the bomb nonetheless, sacrificing himself. Although the bomb kills El Diablo, Incubus is destroyed by the blast as well.

Incubus is quite reticent and a being of few words. He possessed a God-complex, having been worshiped as a deity over the years in various places. Because of this, he is understandably very eager to conquer the modern world with his mystical powers, once he possesses Gerald Davis and his sister sets him free. His personality prior to being betrayed and imprisoned is unknown, but he was worshipped along with his sister by the global population and they clearly work well together as leaders so it can be assumed he was a benevolent and competent ruler. Incubus presumably shared his sister's confidence in their ability to renew humankind for the better and this coupled with his powers made him impossible to intimidate. They also gave Incubus pride in his status as one of the oldest living metahumans and makes him believe metahumans are ready to rise up and take the power back, to end the oppression they had endured.

Incubus deeply loves his sister Enchantress; they are about as close as two siblings can be and shared their ambition to revolutionize society. Although she tended to be the ringleader in their revolution, they still did just about everything together, with her helping him adjust to the 'new world' and him going out of his way to save Enchantress with his mystical tentacle when she is almost killed by Amanda Waller, with her evidently expecting him to do so meaning she already trusts him with her life. Although he was very similar to his sister, he notably showed less restraint when it comes to violence, even if most (not all) of his victims were armed forces who had cast the first stone, and he appeared to be less intelligent and complex than she was and displayed none of her tact or strategic knowledge, and so he usually follows her lead. Additionally, while they are almost never seen in disagreement about anything, it is unclear if he shares her mischievous sense of humor, or if he has the same empathy for Task Force X that his sister does.

Despite coming across to his enemies as being arrogant and genuinely selfish, Incubus, like his sister, has ultimately always had good intentions, as both of them genuinely believed that their actions were what was best for humanity as a whole, and for the sake of recreating civilization for them after destroying the one they had replaced their own with, to in their eyes cleanse an egregiously corrupt world, though their strong convictions were arguably not misplaced.

Incubus wreaks havoc in the station 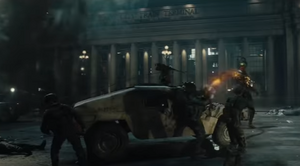 Incubus killed by the Bomb 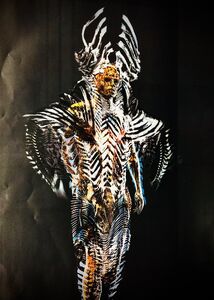