India Wilkes is the sister of Ashley Wilkes, cousin to Charles and Melanie Hamilton, rival of Scarlett O'Hara and one of the supporting characters in Gone With The Wind.

At the Wilkes' barbecue party at Twelve Oaks, India tells her father how much she despises Scarlett for the woman managed to woo all of the male guests there and still romantically pursues Ashley while he's engaged to marry his cousin Melanie Hamilton.

India despises Scarlett more when she discovers that her rival is engaged to marry Charles Hamilton, her cousin whom India is in love with. After Charles dies from pneumonia, India is distraught from his death and Scarlett still attends the party for the returning soldiers despite being told not to attend parties due to her widow status. When Scarlett's engagement to Rhett Butler is announced, India endorses cutting both of them from respectable society. She blames Scarlett for causing the death of her second husband Frank Kennedy. India also implies that there has always been more to Scarlett and Ashley's relationship than was apparent.

One day, India spies on Ashley and Scarlett as the two are sharing an seemingly romantic embrace. Harboring an intense dislike for Scarlett, India eagerly spreads rumors of an affair between Ashley and Scarlett. These rumors she spreads get the whole town talking and nearly ruins Scarlett's reputation. Rhett forces Scarlett to attend Ashley's birthday party to clear up the lies. However, Melanie doesn't believe these rumors nor does she want any lies spread about her "sister" Scarlett and as punishment, bans India from her brother Ashley's birthday party, causing a rift between the Wilkes and the Hamiltons as a result. India apologizes for the quarrel she caused to Melanie when she is visiting her on her deathbed. 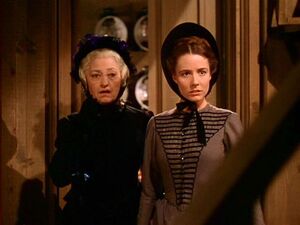 India and Ms. Meade catching Ashley and Scarlett in an innocent embrace and spreads lies about it 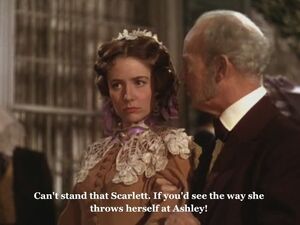