Indigo is an alien android cyberterrorist that attempts to wipe out the human race. Formerly known as Brainiac 8 she is associated with Brainiac 1, the one that Superman often fights.

She has a history with Non and as the prisoner of Fort Rozz that helped Kara make it out of the Phantom Zone and is also the one who allowed all alien prisoners in the prison to escape and run loose on Earth. She is one of the main antagonists in the second half of season 1 of Supergirl.

She was torn in half by J'onn J'onzz and she seemed to deactivate while Supergirl stood over her.

She was portrayed by Laura Vandervoort, who also played Anna in Jigsaw.

Arriving on Earth, Indigo hacks an infidelity website and tries to have the sensitive information released by sending it to Cat Grant. However, Cat refuses to publish the information. When Indigo realizes that Cat will not publish the data, she hacks into every monitor at CatCo. and contacts Cat directly claiming that there will now be chaos in National City as retribution. She then hacks the city, turning every traffic light in the city green resulting in traffic chaos. Casualties are only prevented because of Supergirl.

She later contacts Winn through his computer when he tries to crack her code. Moments later she enters the room through the computer, manifesting not in her human form but in her android form - revealing to Supergirl that the hacker is not human. After manifesting, Indigo arrogantly mentions Kara's alias Supergirl and asks what exactly makes her so super. Kara notices the sign on Indigo's forehead which Indigo claims is the sign of her people. Indigo then claims that she knows everything about Kara. She then attacks Kara and blasts her through the window. She turns to kill Winn and James but Kara returns in time to witness both men being defeated by Indigo with ease. Indigo sarcastically asks Kara whom of the two she should skin first but the DEO storms into the room just in time to prevent bloodshed. When Alex and Hank burst into the room, Indigo enters the internet and escapes the building.

Indigo reappears somewhere else in National City much to the horror of two civilians. After seeing the two, Indigo claims that she would kill the two but refrains from doing so as their world is days away from ending anyhow. The two flee immediately. Indigo is alerted by a noise behind her and sees an old associate of hers, Non. Ignoring all social conventions, Indigo claims that she despised Non's recently deceased wife Astra and that she is glad she is dead. Although Non is angry, he attempts to convince her that Myriad is working and attempts to recruit her to the project. However, Indigo in turn claims that Astra's idea of living alongside humans cannot work as predators cannot live alongside prey. Non asks her what she has done but Indigo merely states that she did enough to turn the wheel. Indigo states that hell is coming to earth and that only the Kryptonians and Indigo herself will survive it. Before Non can ask more questions, Indigo teleports away.

To destroy humanity, Indigo uses a US general to get into a nuclear missile silo. After entering the compound through the general's phone, Indigo takes out the general and the men surrounding him. When the remaining survivor tells her that she can't kill him as she has to turn two keys at once to launch the missiles, Indigo claims that she is aware of that. She knocks out the man nonetheless and takes the keycards from the corpses. She then easily stretches her arms and turns both keys and activates the missiles. When Supergirl arrives, the launch sequence is already activated. Indigo attacks Kara nonetheless to prevent her from stopping the missile. However, Kara breaks free and flies after the missile. She manages to defuse the missile and has it plummeting into the bay.

Back at the base, Indigo rages at the failure. Supergirl returns to the base to take her down but Indigo then notices her smartphone. Realizing that Supergirl is not working alone, Indigo uses the smartphone to attack Winn who is currently writing a virus at the DEO to destroy Indigo. Although Indigo manages to send her hand through Winn's monitor and throttle him, Winn continues to write the code as Indigo brags to Kara. Winn successfully completes the virus, causing Indigo to fall to the floor in pain. As she is succumbing to the virus, Indigo spitefully lashes at Supergirl, claiming that Kara would have never even reached Earth if it wasn't for Indigo. Indigo reveals that Fort Rozz escaped the Phantom Zone when Indigo linked Fort Rozz to Kara's pod when she was passing by on her way to Earth. After that explanation, Indigo is ripped apart by the virus and is assumed to be dead.

Indigo's body is later retrieved by Non, who gleefully claims that she might now be more inclined to do things his way.

Non manages to reassemble Indigo who joins him in his cause. However, Indigo keeps attempting to manipulate Non into murdering Kara and using Myriad to conquer, not to save.

After failing to convince Non to kill Kara, she tries to convince him to use Myriad to conquer the entire universe instead. Before she learns the decision Non has made, she notices the presence of the martian J'onn J'onzz in National City. Indigo heads to the location where she senses J'onzz and swiftly takes out his companion Alex Danvers. She then turns to J'onzz and taunts him about the annihilation of his family and planet, which causes J'onnz to rage at her, grab her and throw her into a shed filled with explosives. The shed goes up in flames but Indigo survives and ambushes the distracted J'onn. She stabs him in the stomach and while the wounded J'onn falls to the ground, Indigo turns to Alex.

Kara and the DEO eventually track down Non and his group and are shocked to find out that they have been in the wreckage of Fort Rozz, which is still on the crash site in Nevada, the entire time. When Kara and J'onn J'onnz arrive there, they are met by Non and Indigo in the plains in front of Fort Rozz. When asked where his army is hiding, Non reveals that they are already in their sleeping pods, ready for the journey to another planet. He tells Kara that nothing is keeping him on earth but that she still will not save humanity as the new myriad signal is powered by Indigo herself. Kara uses her heat vision against Indigo, smashing her away, but Non then engages her in a furious battle. While Kara fights Non, J'onn engages Indigo who once more stabs him in the stomach with her blade hands. Nonetheless, J'onn gains the upper hand and rips Indigo in half, killing her. 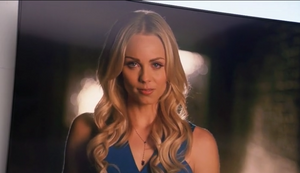 Indigo in her human form. 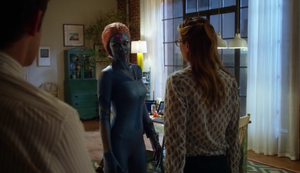 Indigo reveals herself to Kara. 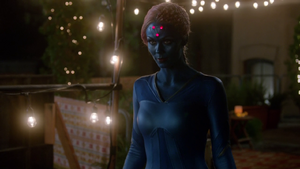 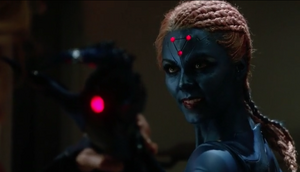 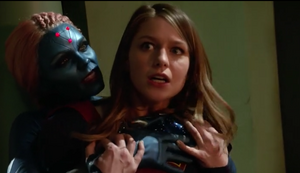 Indigo attempts to stop Kara from defusing the missile. 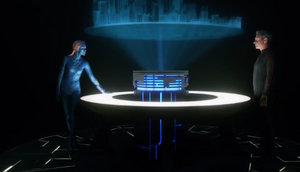