Killing any living thing he sees.

Kill anyone who comes in his way (succeeded for a while then failed).

The Indoraptor looks similar to the Indominus rex, but is around three-fourths the size, nearly the size of a Carnotaurus sastrei, and possesses raptorial claws on his feet, making his dromeosaurid genetic contributions more apparent than the Indominus's. He is primarily a dark black color in comparison to his albino predecessor, with a golden yellow streak from the base of his neck to his tail, which bares a strong resemblance to Blue's streak. The shape of his head resembles that a Tyrannosaurus rex, and he has a sprinkled red mark around his eye orbit.

The Indoraptor was a new, genetically-modified dinosaur created in a hidden laboratory in the Lockwood Manor by Henry Wu using the DNA of the deceased Indominus rex and a Velociraptor. Wu desired to inject the DNA of Blue, the last living Velociraptor, into enhanced Indoraptors with her advanced ability to respond to commands.

During the Lockwood Manor Auction, the Indoraptor was introduced to a crowd of wealthy people who had come from all over the world to buy the dinosaurs who were evacuated from Isla Nublar before the eruption of Mount Sibo destroyed the island. Unfortunately, the Indoraptor wasn't up for auction as he was only in the prototype stage, but that fact didn't stop the audience from bidding ridiculous amounts of money on the hybrid. Gunnar Eversol began to accept bids at the behest of Mills, with Russian mobster Anton Orlov winning the bid. Owen Grady then appeared with a Stygimoloch named Stiggy and together they disrupted the auction, with Owen and the Indoraptor sharing a close glance at one another.

In the ensuing chaos, the mercenary commander Ken Wheatley thought he tranquilized the Indoraptor and attempted to extract one of his teeth as a trophy, but he feigned sedation and escaped, killing Wheatley, Eversol, and others.

After Mills revealed to Owen and Claire Dearing that Maisie Lockwood was cloned from Benjamin Lockwood's deceased daughter (which was the reason why the late John Hammond ended his partnership with Lockwood, as he opposed human cloning), the Indoraptor hunted the trio throughout the mansion and separated Maisie from Owen and Claire. Soon, the hybrid had Maisie at his mercy on her bed and was about to snatch her with one hand until Owen came to the girl's rescue, armed with a gun he'd taken from a mercenary named Dan, who had been killed by the Indoraptor.

Barely missing Owen, the Indoraptor nearly fell through the fragile glass but managed to save himself and pull himself back up. He seemed to give Owen an almost sarcastically mocking look, but before he could do anything else, Blue appeared again and jumped on him, sending the two dinosaurs tumbling down toward a fossil Triceratops skull on display. The unfortunate Indoraptor ended up being fatally impaled on the brow horns of the skull and there he died as Blue stood on his corpse while lettting out victorious roars before leaping off of her dead enemy and walking away, triumphant.

It is unknown what happened with the Indoraptor's body after the incident, but it was most likely disposed of, alongside the technology to create more Indoraptors in the fallout of his escape.

The Indoraptor is an aggressive and violent hybrid who apparently inherited the Indominus' acute intellect (displayed this by playing possum after sedated by Wheatley) and violent tendencies. There are some distinctions in his behavior compared to that of the Indominus', though. While the Indominus seemed to be in a state of perpetual anger and her attacks were her lashing out, the Indoraptor had a sense of humor and took amusement in his actions, which was shown when he played with Maisie's hair from within his cage to frighten her and visibly smirked maliciously when pretending to be tranquilized.

If there was anything else that the Indoraptor inherited from his predecessor, it was the same sadistic pleasure he took in attacking and brutally killing those helpless against him. He displayed this by raising his hand in Maisie's direction while stalking her in her bedroom instead of quickly going in for the kill, feeling delighted by the young girl's fear and despair, proving true malice.

In the process of using the Indominus rex and Velociraptor DNA to create the Indoraptor, Wu had introduced a monster that was as every bit as powerful and horrifying as the reason for Isla Nublar's abandonment (if not outright worse) to the world. With the speed and agility of a Velociraptor and the brute force of the Indominus rex, few could stand in the Indoraptor's path and get out of it with their life.

The Indoraptor on the roof of the Lockwood Manor. 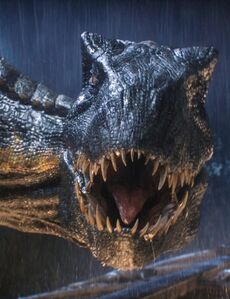 The Indoraptor's evil stare.
Add a photo to this gallery

Retrieved from "https://villains.fandom.com/wiki/Indoraptor?oldid=2664021"
Community content is available under CC-BY-SA unless otherwise noted.