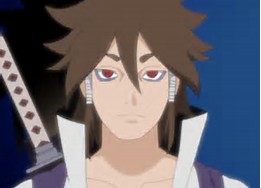 Indra Otsutsuki was the elder son of Hagoromo Ōtsutsuki, as well as the grandson of Kaguya Otsutsuki and the ancestor of the Uchiha clan.

Indra was the first son of Hagoromo, inheriting his father's eyes, his powerful chakra, and spiritual energy. From a young age, he demonstrated great talent towards ninshū and anything he applied his mind to. Because of his prowess, he lead a solitary life — finding no need to depend on others. This mindset was later revealed to have been influenced by his "uncle" Zetsu. When Hagoromo was on his deathbed, he selected Indra's younger brother, Asura, to carry on his dream of establishing peace throughout the world.

Angry and jealous that his father had not chosen him, Indra was an easy target for Zetsu to manipulate. Indra fought against Asura to claim what he believed should have been his birthright. His descendants, who would become the Uchiha clan, would continue this fight with his younger brother's descendants, the Senju clan. Zetsu watched over Indra's descendants in the hopes that one of them would awaken the Rinnegan and provide the means to revive Kaguya Otsutsuki.

Recognising his own talents, Indra became proud and independent, determined to walk his own path unaided. He believed that force and strength were the ultimate key to peace, and though he loved his father greatly, he challenged his decision to let his younger brother carry on his will. He died a bitter man, cursing his brother and never letting go of his lust for power.

Indra had long black hair cut short on top, with two locks wrapped in bandages framing either side of his face. His eyebrows were cut short — a symbol of his nobility and his eyes had markings around his eyes which were turned up at the corners. He wore a high-collared, light-coloured kimono held closed by a dark sash. Around the collar of the kimono was adorned with magatama under which he wore a black full-bodied suit. He was also depicted in full-body armour. He had allowed his hair to grow out flowing around his attire.

From a young age, Indra was recognised as a prodigy even in his legendary father's eyes. Having inherited his father's powerful chakra and spiritual energy, Indra possessed a devolved version of his father's dōjutsu; the Sharingan. He would also awaken its enhanced form: the Mangekyō Sharingan which is presumably the spiral-like pattern which originated at his pupils and covered his irides, which was shown when he debuted.

With it, he became the first wielder of Susanoo, which he could manifest in its stabilised "final" form. Indra also wielded a sword in battle.

Hagoromo noted that Indra's chakra remained after his body was destroyed and it was reincarnated into various individuals throughout history. Madara Uchiha, the previous reincarnation helped create Konohagakure, the first ninja village with Asura's reincarnation Hashirama Senju. However he eventually fell to the Curse of Hatred due to various occurrences and continuously sought more power. His growing ambition led to him to covet and eventually steal Hashirama's DNA, inadvertently gaining a portion of Asura's chakra and implanting it in himself. As a result of this, Madara awakened the Rinnegan. After Madara's death, Indra was reincarnated into Sasuke Uchiha.

Sauke succumbed to the Curse of Hatred after being hardened by his brother Itachi Uchiha and manipulated by Tobi , both during impressionable points in his life. Unlike Madara, Sasuke had been given time to rationalise his reasons for gaining power and realised he should be using them to protect his former home and allies. Sasuke then puts aside his feelings of hate and revenge and resolves to fight alongside his arch-rival Naruto Uzumaki. According to the Sage of Six Paths, this decison might be enough to end the conflict once and for all.

Retrieved from "https://villains.fandom.com/wiki/Indra_%C5%8Ctsutsuki?oldid=1502327"
Community content is available under CC-BY-SA unless otherwise noted.