Insulting Impmon and beating him up.

Indramon is an Exalted Beast Digimon whose name is derived from the mythological Indra. It is the "Horse" Deva, and serves the Sovereign Zhuqiaomon. As a follower of Zhuqiaomon, it has an intolerably arrogant personality. When it opens its mouth only bragging comes out, and it is constantly fussing over the glossiness of its mane and tail. It indulges in its talents, and ridicules those who work hard. Among the Deva, it is on especially bad terms with Vajramon. Though it fusses over its appearance, in battle it is comparatively unrefined; using the "Treasure Shell" tied to its arms, it beats the opponent down by wielding it like a cudgel.

Indramon bio-emerged in the real world. He first spoke to Impmon after laughing at the smaller Digimon and pointed out Impmon had "the stench of humans", a "Digimon that has been kept by humans has no self-respect" and told Impmon he should abandon his dreams of Digivolving. Renamon arrived, causing Indramon to tell them that they were pathetic. He then disappeared. Apparently never one to turn down a challenge, he later returned and battled Impmon, despite telling Renamon he'd gladly fight her as well.

Indramon battled Impmon for a great deal of time and congratulated him on having heart and courage (though he was greatly angered when Impmon insulted the Digimon Sovereign known as Zhuqiaomon, commenting "I won't allow you to insult my master!"), and beats up Impmon badly. When Indramon was about to crush Impmon, Renamon saved him in the nick of time. He then battles the Tamers, but Indramon was too strong, and blows a strong attack back at them. Impmon, refusing to go down quietly, charges at Indramon. Indramon then knocks Impmon into the air. Indramon left thanks to Mitsuo Yamaki and the Juggernaut program.

But unfortunately, the Juggernaut program's power was not enough to destroy the horse Deva, and returned later (he was much larger this time). Again, Growlmon, Gargomon and Kyubimon try to take him down, but still no match. However, Takato was again able to digivolve Growlmon into WarGrowlmon (thanks to Kazu giving him a homemade D-power card), who easily destroys Indramon with his Atomic Blaster.

Indramon is an anthropomorphic purple horse creature with white mane and tail and stands on two legs instead of four like a normal horse. His hands are two big hooves, and he carries a big horn on his back

Indramon can fire a powerful blast from his horn and attack anyone with his strong hooves.

An Ultimate Digimon that looks like a horse and is one of the Deva Digimon. A subordinate of the Four Holy Beasts member Zhuqiaomon, he is disgustingly egotistical, overconfident, and self-conceited. Whenever his mouth opens, only boasts come out of it, and he never misses the chance to maintain his mane and tail. He laughs at those who are being attacked, and makes an effort to perfect his talents. His rivalry with another Deva member, Vajramon, is especially foul. In combat, he brandishes his huge, prized, roughly-planed "Bǎo Bèi" shell like a club, mowing down the enemy whilst also taking care about his physical and personal appearance. His special attack is "Adhomukha", which uses his terrific breathing to blow into his shell and create a supersonic wave. 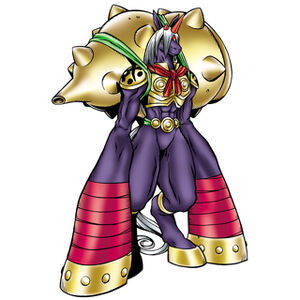