The Dancing Man
The Grinning Man

Looking up at the sky.
Chasing others.
Stalking.
Communicating with humans.

Capture his victims and bring them to their untimely doom.

Communicate with Earth's inhabitants and warn others of disasters.

Indrid Cold, also known as the Smiling Man, is a human-like cryptid, which originates as a modern Urban Legend on the internet. Many have speculated that Indrid Cold might be related with the infamous Mothman.

Indrid Cold is believed to be a very tall man with an old suit. His eyes are very small, and wide open, with a cartoonishly wide and long eerie smile on his face. Some suggest that the man is missing some face pieces, such as ears and the nose, while others have described him as almost looking completely normal physically. People have described his suit to be either blue or green colored. It's believed that Indrid Cold could be an alien or a ghost. Indrid Cold can be compared to the Joker and SCP-106 due to his titular creepy grin, his insanity and his hobby of stalking people.

The personality of Indrid Cold or the Smiling Man differs between sightings. Indrid Cold’s experiences with the salesman and John Keel paint him as a non-malevolent alien who means no harm to anyone and even presumably helps them be safe by warning them of future disasters. However, his experience with the two boys and the family sighting make him out to be a creepy and possibly paranormal stalker, but nothing much more, not seeming to do any other sort of harm to people.

The Creepypasta version introduced in the Reddit post introduce him as a very creepy and clearly insane person who behaves very erratically, dancing around randomly and staring at the sky. This version is a full-on stalker, pursuing the author for no apparent reason. Due to the personality contrast between this man and Indrid Cold, and the fact that he does not seem to be alien or ghostly in origin, it’s very likely that this man is a seperate entity from Indrid Cold, only sharing the titular creepy grin.

The first sighting of the man is believed to be on 16 October 1996. When two young boys were at the Elizabeth's New Jersey, spending time together until they noticed a very tall human-like being behind the fence. Both of the boys were brave and went towards the man, trying to step closer to see the man. However, both of them started to feel fear, and realized the man had a creepy smile on his face. The man starts to look at the boys, peering at them though the fence. The boys started running away from the man until they got away. After the encounter, boys started remembering more of the the man's appearance, describing his face as having small beady eyes and no other features other than his titular grin.

Interestingly enough, after two weeks another man had a similar experience. On 1 November 1966, A salesman which was driving in the night to his home, he noticed weird lightning in front of him. In front of him, the salesman saw a weird-lamp looking spacecraft vehicle. The door opened up, as the man got out from the spacecraft, going towards the salesman. The man spoke to the salesman telepathically, introducing his name as "Indrid Cold". After the two had a conversation, where the man said he was an alien from a distant planet who meant no harm to the salesman, Indrid Cold said that he will visit the salesman again, as Indrid Cold entered his spacecraft and disappeared.

The salesman ended up contacting the police, trying to tell them the story, convince them that it's real. The police didn't believe the story, while the news-outlets became interested in the story. After the salesman told his story, other people went forward and told their experiences with Indrid Cold as well. The salesman also claimed that Indrid Cold brought him to his planet for six months in a far-away galaxy.

A family also reported that they had paranormal experiences, which indicates towards Indrid Cold. The daughter of the family woke up one night, seeing a big tall man, grinning at her creepily. The man walked around her bed, and stood in front of her. As the daughter screamed in fear, and went under her covers to hide from the man, he just disappeared.

Late American investigator John Keel, investigated the Mothman. During his investigations, he received phone-calls from Indrid Cold. The final conversation they had consisted of Indrid Cold telling John Keel to run away because a terrible disaster will happen. As John Keel escaped, the Silver-Bridge collapsed, with 46 people killed from the event.

In 2012, a Reddit post was created by "Blue_tidal", titled "The Smiling Man", which ultimately became the cryptid's nickname. In the story, the author explains how he lived in a American city, where he would of go for long walks in the middle of the night, thinking about various topics all alone. For four years, the author has been going outside in the night, without any problems until one day.

The day was Wednesday, and the author went for another walk. As he was walking, he noticed the man making a strange dance in front of him. The author believed he was just drunk and that there's no serious danger. Until the man started going towards the author, as the author starts feeling uncomfortable. The man was the whole time avoiding eye contact, and was looking up into the dark-sky, while the man's started to smile wide open, like a cartoon character would of.

Author decides to cross the street and move away from the man, realizing how dangerous the situation might become. The man decided to follow the author, and crossed the street with him. As the author realizes that the man is getting closer, and that the man's smile is becoming more sinister then before. Author describes becoming extremely uncomfortable by the situation, walking again straight, without looking at the man. Until the author decided to look behind of him again, just to see the man going towards the author again.

The Reddit post ended up blowing up, and the story became extremely talked about on the internet, giving Indrid Cold/The Smiling Man its identity. 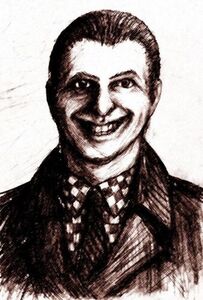 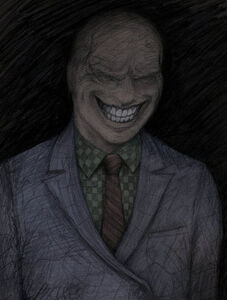 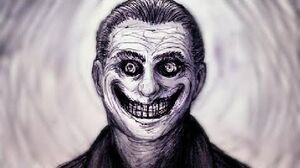 Who is the Smiling Man? 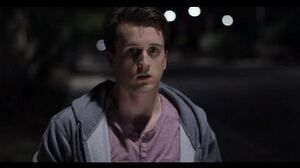 2AM The Smiling Man - short film