Dragon
The Infected Imperialdramon is a major antagonist in Part 2 of Digimon Adventure Tri.

It has green eyes

It was created by a Mysterious Man to attack Gomamon, Palmon, and Leomon. Leomon was infected by the dragon. Joe and Mimi were able to aid them through the laptop. With their new potential, Mimi and Joe were able to Digivole Palmon and Gomamon to their Mega forms, Rosemon and Vikemon to fight the infected Imperialdramon. It Digivolved to its Fighter Mode form in an attempt to finish them off, but with the help of Leomon, Vikemon and Rosemon were still able to defeat the infected Imperialdramon with their combined attacks.

It has same powers of original Imperialdramon: 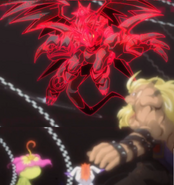