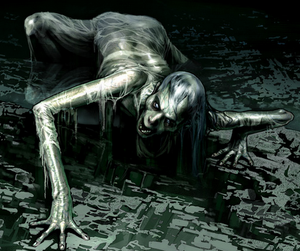 An Inferius (Plural: Inferi) is a dead body wich is reanimated by a Dark Wizard in the Harry Potter franchise. An Inferius can be compared to a zombie. They serve the Dark Wizard as a puppet. They were used by Voldemort during the First and Second Wizarding War. An Inferius is a dark creature, and it strongly dislikes light or fire. This means they are vulernable to most spells which produce fire.

In 1979, Sirius Black's brother, Regulus Black tried to steal Slytherin's Locket (one of Voldemort's Horcruxes). He was killed by the Inferi's and told his house elf Kreacher to bring the real Locket to the Black Mansion, which Kreacher did.

In 1997, Harry Potter and headmaster Albus Dumbledore went to the cave on the search for Voldemort's Horcruxes. Harry was pulled underwater by the Inferi's. But luckily he was saved by Dumbledore who used a spell that produced a firestorm which kept the Inferi away, allowing them to escape the cave.