Spirit of the Soul Edge weapon

Absorbs the abilities and fighting styles of his victims
Soul Edge

Power-Hungry Demon
Inferno is the overarching antagonist of the Soul Calibur video game series. He is the soul of the Soul Edge itself, representing its true, spiritual form. Living within the cursed sword, he takes possession of those that wield the sword, transforming them into the Azure Knight known as Nightmare.

Over the years, Inferno has served as the final boss in most of the Soul Calibur games as the second form of Nightmare after he is defeated in his initial form.

In the 16th century, Rock's father had bought the sword in an auction, but Cervantes, a pirate in the employ of Vercci, attacked Adams' ship and made off with the Soul Edge. He eventually learned to use his power, and began harvesting souls for the sword to feast on.

For two decades, Cervantes possessed the swords. Under Cervantes' control, Soul Edge often manifested himself as a pair of swords instead of just one. Many ventured to the small port town in Spain that Cervantes used as his base, and Cervantes destroyed them all easily. There was one, however, that proved to be more than a match for Soul Edge's power. This was Sophitia, a sacred warrior who was protected by Hephaestus, Greek god of the forge. During her battle with Soul Edge, Sophitia managed to actually destroy one of the twin swords. Although she was badly wounded, Soul Edge was nearly destroyed, and the loss of control caused Cervantes to lose his next battle to Taki. Another young warrior, Siegfried, stumbled upon Cervantes' body. Realizing that Cervantes was now useless to him, Soul Edge entered Cervantes' body and began a battle with Siegfried. Half of his power was gone, though, and Soul Edge was defeated. The victory turned out to be Soul Edge's, however, for when Siegfried took hold of the demonic blade, the essence of Soul Edge was able to completely possess the unstable young warrior. Soul Edge used his remaining power to shower humanity with the Evil Seed, which he had been preparing all those years when Cervantes was dormant in Spain. The Evil Seed rained down all over the world, causing chaos and destruction unlike any in recorded history.

Soul Edge transformed Siegfried into the foul creature Nightmare, and used his new host to rebuild his strength. The destruction of one of the twin swords and the release of the Evil Seed had left Soul Edge depleted. With the help of several minions, Nightmare was able to harvest many souls to power Soul Edge. As he grew stronger and stronger, Soul Edge noticed that Siegfried's will was increasing as well.

Unlike Cervantes, who had gladly accepted the unholy possession, the young knight was actually attempting to resist Soul Edge's control. As Nightmare, Siegfried used some of Soul Edge's power in an attempt to resurrect his dead father Frederick. Although he succeeded in creating an apparition of his father, Siegfried realized it was not real and began to resist Soul Edge even more. He finally freed his mind from Soul Edge's influence and was able to separate himself from Soul Edge. By this time, however, it did not matter whether Soul Edge had a host or not. He had collected so many souls that his power was tremendous, and he was able to finally manifest in his true form.

A trio of warriors, Kilik, Xianghua, and Maxi came to challenge the newly released Inferno. Normal humans would not have been much of a match for Inferno, but Kilik and Xianghua possessed mystical weapons that rivalled Inferno's power. The combined power of their weapons proved to be too much for Inferno. But neither Inferno, nor Soul Edge, was destroyed. Inferno had escaped back into the cursed blade, which Siegfried had reclaimed.

Soul Edge would make Siegfried do horrible things in his sleep however. He would kill many asleep, and when he woke up, he had no memory of it, but he would always be surrounded by corpses. Eventually, Siegfried succumbed to Soul Edge's power, and became the Azure Knight once more.

One day however, at the Ostrheinsburg Chapel, Nightmare was challenged by Raphael to a fight. Nightmare accepted and nearly won, but a small spark of sanity appeared in the Azure Knight's mind once more.

That small spark fought Inferno in the Azure Knight's mind, which caused Nightmare to stand motionless. Raphael mustered what was left of his strength, and stabbed the sword in his eye. This weakened Inferno severely, and Siegfried managed to reclaim his body. He threw off the azure armor that he resented, and he almost destroyed it. Suddenly, Soul Calibur appeared, free from her prison within Soul Edge. Siegfried instinctively took Soul Calibur, and drove the blade through Soul Edge's eye.

Soul Edge still was not defeated, however. It bonded with Soul Calibur, rendering both powerless, and created Soul Embrace. Inferno escaped into the detestable armor that Siegfried once wore, but could not move without a host. Zasalamel appeared, and shared a wordless conversation with Inferno, before conducting a ritual to give the horrible soul of Soul Edge a body. Inferno, as Nightmare, then set out to reclaim himself, Soul Edge.

Eventually, Nightmare and Siegfried met at the Lost Cathedral. The Embrace was finally broken. Siegfried claimed Soul Calibur, while Nightmare took Soul Edge. They clashed, and the two powers leveled the Cathedral. Nightmare fell into a warped dimension, but even then Soul Edge sought power. Because Nightmare had been given a body by the evil and hatred that dwelled there, the sword and body ended up at Ostrheinsburg when they fell out of the void. Soul Edge stretched his evil roots into the azure armor. The shockwave admitted at the Cathedral spread an evil energy that made all of the sword's shards active. Now Soul Edge called out to them and they returned, both small and great. This included both the being Charade and Soul Edge's female half, which was being wielded by Cervantes. These pieces had been scattered by the Evil Seed, but they were now being called home. The sword drank them all in, and for the first time in decades, he was mostly whole again. But he still was not satisfied, and the sword continued to stretch into Nightmare. Now the Azure Knight's body, which had been formed from a lingering hatred and a tormented ghost, truly became Inferno.

Finally, drawn to the sword like a pulsating beacon, the sword's servants began to gather at Ostrheinsburg. The azure armor was no longer enough to contain the evil power, and so the power and mind of Soul Edge sank his roots into the Earth itself, and Ostrheinsburg became a cursed city, a vessel that would consume souls to further strengthen the sword. Siegfried, bonded to Soul Calibur, arrived to confront Nightmare and they fought once more. Nightmare injured Siegfried, forcing him to draw on Soul Calibur's power. Nightmare shattered Siegfried's crystal armor, but was impaled on Soul Calibur, seemingly robbing Soul Edge of its power for seventeen years.

17 years later after Nightmare was destroyed by Siegfried the minions of Soul edge to the remains and gave Inferno a new human host that allowed Nightmare to be reborn under the name Graf Dumas (heavily implied to Raphael). This version of Nightmare was different from his predecessors that wants to rule the world rather than destroy it and was a cunning strategist which proved useful for Soul Edge but not to Tira due being dissatisfied with the new Nightmare and decides to replace this host with Pyrrha. However it was dissatisfied due to Not using it's full power because of wanting to Siegfried's style and it must using it's current host style of fighting to unlock it's full power without the host's will overcoming it as it is very strong. Graf Dumas had become ruler of Hungary and manipulated from the shadows by using Patrokalos as a pawn and had murder innocent humans believing to be Manifested in order to make an army to take over the world in his twisted image. Eventually Graf Dumas revealed himself to be Nightmare to Patroklos and Pyrha to this revelation.Nightmare was presumably slain by Zwei, a man who he previously hunted for so long though Zwei himself was attacked and thrown off off by Pyrrha in her malfested state and later become the new host for Soul Edge become Pyrrha Omega just as Tira wanted. Pyrrha went on a rampage but was eventually stopped by her brother and freed her from Inferno's influence.

Inferno returns as the final antagonist in the main story mode. After Nightmare is beaten by Kilik, the Soul Edge unleashes its true power, releasing Inferno from it. Inferno transfers them to the Myriad Souls where he engages in battle with Kilik, alongside Xianghua. Both Xianghua and Kilik (using the power of the Soul Charge) were able to defeat him, destroying Soul Edge once and for all. 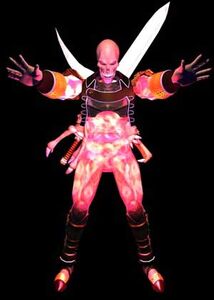 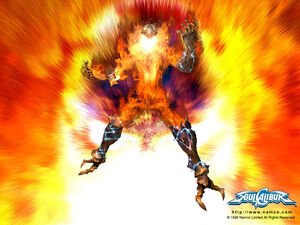 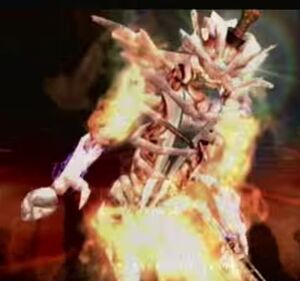 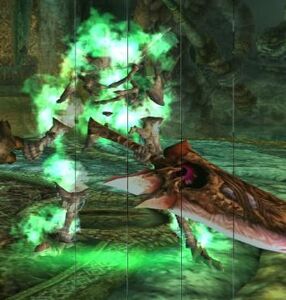 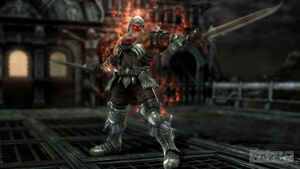 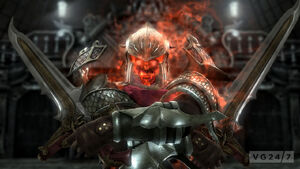 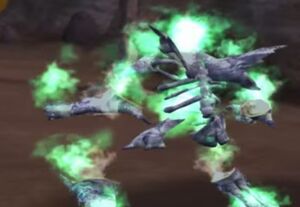 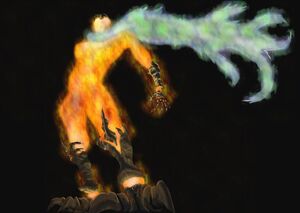 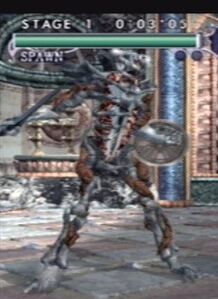 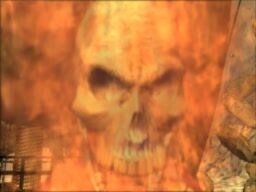 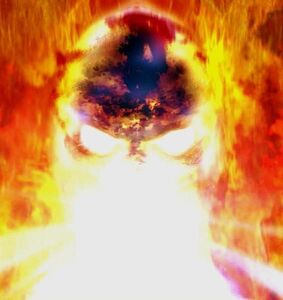 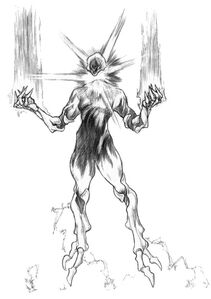 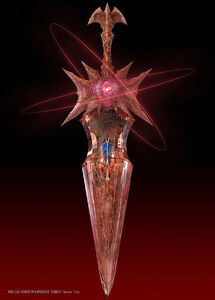