The Ing (Luminoth for "terror")

Umbrakinesis
Dark magic
Dark lasers
Can demonically possess other creatures, even mechanoids
Greater durability and stamina than many light creatures
Can possibly survive in the vacuum of space
Shape-shifting
Tentacles

Attacking the Luminoth in their Temples

Retrieve the Light of Aether that they stole, and conquer the cosmos

The Ing are central antagonistic species in the 2004 videogame Metroid Prime 2: Echoes. From the dark dimension of the planet Aether, the Ing became obsessed with stealing the Light of Aether, such an act would destroy the light-variation of the planet. At the same time stealing the Light of Aether to their own Dark Aether would strengthen it and make the Ing invincible. The Ing are dark evil shapeshifters, and mostly resemble giant arachnid-like creatures with five legs, and clusters of red eyes in their normal forms, but can turn into black and orange clusters of matter when not in a host, and in an amorphous form they are just a black puddle of goo. The Ing fought the species of planet Aether, the Luminoth, in a war that lasted seventy years prior to the arrival of Samus Aran.

The Ing were later revealed to be from the planet Phaaze, the source of all Phazon, and were born of the Phazon that the Leviathans had brought to planet Aether.

Planet Phaaze is a sentient being which sends out its offspring, the Leviathan, to corrupt planets and makes them clones of Phaaze. The Leviathans corrupt local organisms, often the strongest, and they mutate them so they become supremely aggressive. The example of one organism was Metroid Prime. On planet Aether, an interstellar nomadic race named the Luminoth had found planet Aether, a beautiful world, and had colonized it, becoming guardians of the Light. The Luminoth lived in peace with nature and also technology, and, unlike many other scientific races, had no wars at all. The Luminoth were on a peaceful existence until a Phazon Leviathan came hurtling out of space and hit the planet. This not only destroyed the Agon Plains, turning it into a desert because of its fiery trail but engulfed the Torvus Forest in a tsunami and cataclysmic destruction. This wrecked Aether and strange anomalies happened, such as objects leaving Aether to another dimension.

When the Luminoth emerged they found the energy was gone, taken to some other dimension. Now desperate to get it back, they sought to investigate the missing matter, but suddenly a vast swarm of demonic-like black clouds came bursting out of a portal one day. This attacked Luminoth, possessing them and making Dark Luminoth, which killed their brothers and sisters. Horrified, the Luminoth fought back against their unseen foes by opening portals to the other dimension. Inside, they found their true enemies, black spider-like creatures which screamed when touched by Light. So they made it their wish to eradicate these demons forever. They found they could not live long on Dark Aether, because of its toxic air.

It transpired the meteor had hit the Dark dimension of Aether and ripped it open, splitting it all in two and consuming all Phazon into Dark Aether. The Ing was born of the Phazon and spawned like maggots. Then the Ing attacked en masse, sending the Luminoth to war.

The Ing split their forces into three factions, but couldn't survive long on Aether because of its deadly Light, so they possessed local creatures and turned them against their friends the Luminoth. The Ing split to get to the Agon Wastes Temple, the Sanctuary Temple, and the Torvus Temple. The Great Temple which commanded all three was sealed off and protected, and its Light was the main one the Ing were after.

The Ing arrived at Agon and fought the Luminoth, killing many, and soon emerged into the Temple. They possessed a Sandigger, renamed Amorbis, and took it back to Dark Aether as a guardian. The Ing then went to the Agon Temple and they stole the Light, killing the Luminoth protector, who left his message after death.

The Ing came to Torvus in the night, killing all Luminoth sentries, and slaughtered all Luminoth warriors, and even turned their watchful drones against them, possessing all local life in Torvus. The Ing fought against the Luminoth using their local guardian Chykka, which they possessed, making it from a War Wasp into a formidable giant predator. Once again, the Ing were successful, they stole the energy and took it to Dark Aether.

The remaining Luminoth gathered in fear for an onslaught at Sanctuary. They didn't have to wait long. Hundreds upon hundreds of Ing, now not fearing the light, came openly and possessed the robots inside Sanctuary, making it a deadly place. Artificial intelligence, already deadly intelligent, became evil and out to kill everything. The Ing became rulers of Sanctuary and stole one of the Luminoth robots, Quadraxis, to Dark Aether and became its possessor, using its deadly Annihilator Beam with force.

Again, the Ing stole the energy and left only one Energy Controller on planet Aether, leaving it deeply uninhabitable and volatile.

Following a crashed Galactic Federation ship, Samus flew to planet Aether but her ship was damaged by electricity in the atmosphere and she had to land it. So she waited for it to repair and journeyed after the Troopers. Samus met a black version of herself, followed her into a portal, and was attacked by some arachnid-like black creatures, which stole many of her upgrades. Barely escaping with her life, Samus found the Troopers all dead, showing their last footage that they were killed by the Ing. After fighting some Ing possessed Splinters which the Ing had used to kill the Troopers, Samus journeyed to an alien temple mentioned in a Troopers' log.

She found the source of the parasitic Splinter hive, and a Splinter Alpha male, possessed by the Ing, dropped down and she killed him. Then she was rewarded with the Energy Transfer Module which made her immune to Ing possession. She then went upstairs, met the Luminoth U-Mos, who told her of his danger and the planet's peril. She then went on his mission to help him restore his damaged world and learned of the Luminoth peril and tragedy of the war. Samus went to Agon, restored the energy after defeating Amorbis, and then she went to Torvus, fought Chykka and killed her, and then restored the energy to Aether's Great Temple. Aether got more stable with each transfer and the dead Luminoth were grateful, and the skies over Dark Aether got more unstable and turned crimson.

Samus went to Sanctuary, the most dangerous place since the Ing knew of her efforts and were going to stop her now. The Ing tried many times, with heavy weaponry in Sanctuary, possessing robots and other weapons, and she fought three Ing, the Spider Guardian, a possessed Pillbug, and the Caretaker Drone, a robot which had defected to the Ing, and the Grapple Guardian, a possessed Grenchler, Power Bomb Guardian, the Ing-possessed Sporb which was the last Ing that Samus killed who had stolen her upgrades. She later found the Quadraxis and alerted when the Ing possessed it, making it black in color, then it fought her. She blew up Quadraxis and took the Annihilator Beam. After making it through the Ing Hive, the birthplace of all Ing, she then turned the energy in Sanctuary back to the Great Temple.

Demise of the Ing

Samus was told by U-Mos to fight the remaining Ing stations and find the Light Energy in the temple of the Ing Hive, the most dangerous place on Dark Aether. She found the energy after finding all the Keys to the Sky Temple and met the evil ruler of the Ing, the Emperor Ing, who stole her Energy upon seeing her. Samus followed the Emperor Ing to his throne room, and she fought him and killed him after a long battle. Samus took the Energy and the world of Dark Aether began to blow up. Pursued by hordes of Ing, Samus ran for it, but was stopped by Dark Samus, who took this destruction as an opportune moment to kill Samus. Dark Samus tried to absorb the Light Suit but was defeated by the overload of Phazon she had. So Samus was surrounded by hordes of Ing but she ran for the portal, and left Dark Aether, just as it blew up and Ing tried to force their way into the other world, but the portal closed and the Ing all blew up with Dark Aether.

A Warrior Ing appears in Super Smash Bros. Brawl as a sticker that increases the bite attacks of Yoshi, Wario, Ivysaur and Wolf

The Ing are very hierarchical, with their Emperor, described as the "Alpha and Omega", at the top, then the Hunter Ing, the flying Ing, who have tentacles and one eye, and the Warrior Ing, and then the Inglets, and the Ingswarm, and the Ing Tentacles which do nothing but block access to areas. The Ing are dark in nature, and hate light with a passion, to this end the Luminoth developed the Light Beam to wound them. They first thought the Dark Beam would overload the Ing but this didn't work. Etymologically, Ing is Luminoth for "terror."

The Ing are apparently cannibalistic, they eat their wounded and dead. In battle, their generals are cowards as they press their minor soldiers into the front lines hoping they will be killed first. Not all Ing generals are like this though: one famous one in Torvus was worthy of a Luminoth warrior.

It is unknown if the Ing have a name for themselves in their own language, or if they talk at all or are telepathic.

At birth, the Ing seem to have a hive mind, such as the Inglets and the Ingswarm. Of all Ing, the Inglets are ironically the most annoying, as they constantly hinder Samus' progress by throwing black matter at her.

The Ing have several powers, including great fighting skills, teleportation, shape-shifting into black goo, possession of both organic and robotic life forms, mind-breaking, reality-warping, the ability to shoot lasers at enemies, damaging enemies with their incorporeal form of black clouds, and supreme command of all Dark Aether's forces. 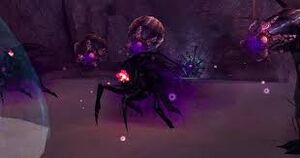