Kill all Spider-Totems and Rule the multiverse.

Alternate Reality Demons
The Inheritors are villains in the Spider-Man series serving as the main villains of Spider-Verse and Spider-Geddon. the Family's most notable and famous member is Morlun.

The Inheritators first appeard in the Superior Spider-Man #33 where Morlun is reuinited with his siblings and the plans of bringing the Great Hunt being in motion.

The Origin of the Inherators was that Solus in his quest to conquer the multiverse corrupted his children into becoming mosnters like him and thus the Inherators were born.They hunted down Spider-Totems for they were stated in the propchey that they would be the ones to bring their downfall. Solus's wife and their children would go on to capture the Great-Weaver and when Karn tried to attack him it vaporised The Matriach causing Karn to be a black sheep to their family.

Morlun was the First member of the Inheritors seen in the Amazing Spider-Man #471 and fought Spider-Man and dominated him during their fist fight.Morlun also had a servant named Dex who he abuses constantlly and later fights Spider-Man Once more but Dex betrays Morlun killing him.

Morlun later returned in the Other Storyline returning from death thanks to his family's technology. There he seeked revenge on Spider-Man for indirectly causing his death and temparaliy caused his death and allowing the other to posses him which kills Morlun a second time.

The Spider-Verse Morlun and the rest of his family are the main villains of this event as his family fully takes center stage alongside him and they went to go after the Spider-Totems killing any of them for the great hunt overseen by their father Solus. They fought the Spiders from other worlds and eventually their father would join them but was detroyed by Kaine and was forced to flee.

The Inheritors return in in the Spider-Geddon storyline.They seek to conquer the multiverse and revenge against the Spider family for their defeat. In the end Karn and Verna are dead alongside Solus,while Jennix,Daemos,Brix,and Bora where turned into babies,While Morlun is the sole survivor imprisoned thus disbanding the Inheritors. 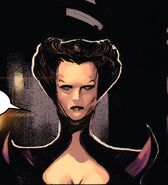 Solus,the Patriarch of the Inheritors 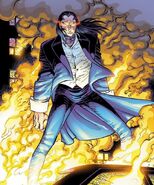 Morlun
Add a photo to this gallery
Retrieved from "https://villains.fandom.com/wiki/Inheritors?oldid=3350823"
Community content is available under CC-BY-SA unless otherwise noted.