Get away with the murder of Dr. Robinson by framing Muff Potter.

Kill Tom Sawyer and Huck Finn and get One-Eyed Murrell's lost treasure for himself (all failed).

He was portrayed by the late Vic Morrow in the 1973 TV-film, Eric Schweig in the 1995 film, and by Kaloian Vodenicharov in the 2014 film.

The Adventures of Tom Sawyer

Injun Joe is a half Native American, half white man. He was whipped by Mr. Douglas, a police officer. Joe had probably been striking fear into the children of the village. His first appearance in the novel was where Tom witnessed Joe murder Doc Robinson while framing Muff Potter for the murder. Following this, Huck overhears Joe plotting the mutilation of Widow Douglas. Towards the end of the book, Tom sees Joe inside the cave, but Joe is not able to see Tom’s face. At the end of the book, Joe is found dead behind the newly sealed cave door.

In the film, Injun Joe is portrayed as a much darker villain than in the book. He first appeared in the opening as he makes his way across the town of Hannibal on a dark and stormy night. He arrives at the town hospital, where he accepts a job from Dr. Jonas Robinson, who at first says it pays two dollars. However, Robinson changes his mind when Joe threateningly unsheathes his knife and puts it at his throat, asking for three dollars unless the doctor thinks he deserves more, implying that he would kill him. After that, Joe then turns and steps out into the night.

Later on the next night, Joe is with Dr. Robinson and the town drunk Muff Potter digging up a grave. There, they uncovered the coffin and corpse of Vic Murrell, where they find a small chest. Robinson picks up the chest and orders the men to put the coffin back and cover up the tracks. However, Joe grabs the box by punching Robinson and open it up, revealing a treasure map detailing the location of a certain treasure that Vic's brother One-Eyed Murrell (a wanted pirate) has stowed away. Just then, Robinson grabs a tombstone in an attempt to smack out Joe, but accidentally smacks out Muff unconscious. This prompted an angry Joe to punch Robinson several times again before unsheathing his knife, attempting to kill him. However, deciding to cover his tracks, Joe puts his knife away and instead takes Muff's knife, using it to stab Robinson in the chest three times, killing him instantly.

Unbeknownst to Joe, Tom Sawyer and Huck Finn, who were trying to remove warts by taking a dead cat to the graveyard at night, saw everything. But as they leave, Injun Joe hears them and pursues them, but they disappear into the mist. Joe then finds a green marble in the grass, and believes it belongs to the kids. Luckily for Tom and Huck, they were not seen entirely, which keeps them safe at least for now.

As part of Joe’s plan, Muff is framed for Robinson’s murder the next day. A desperate Muff tries to ask Joe to vouch for him, only for Joe to lie about what really happened, saying that while he was passing last night through the graveyard, he saw Muff and Robinson digging up Murrell’s grave, and that he saw Muff stab the doctor. Muff, remembering last night’s events, tries to tell the truth, but Joe dismisses it as “drunk-talk”, and there is no treasure or map. Joe then tries to get his partner Emmett to rally the townspeople into hanging Muff for the murder, but they are stopped by Judge Thatcher and Widow Douglas, who suggested that Muff should get a trial so that they can decide whether he is guilty of the murder or not. Muff is then taken into custody afterwards, despite pleading of his innocence.

Despite an oath they signed to never tell what they witnessed the other night, Tom and Huck go on a search for the map, since it's the only evidence that will prove Muff's innocence and keep their oath. The boys tracked down Joe at a tavern, where Joe showed the marble to Emmett, stating that he will track down and kill the person who owns it. Joe then walks off to the harbor, and takes a canoe to the other side of the river, while Tom and Huck follow him in Muff’s canoe.

The next morning, Tom and Huck make another attempt to steal the map, by covering themselves in mud, so they will not be seen. They find Joe drunk asleep, and this gives the boys their chance to steal the map without being noticed. But once again, Tom blows his cover by sneezing just as he is a few centimeters close to the map. Joe wakes up, and looks around to find the person who woke him up, while Tom and Huck make themselves scarce. Joe unsheathes his knife, and searches around until he curses about wild boars waking him. As he walks away, he suddenly turns around and throws his knife at a tree in anger before heading off into the forest.

Tom and Huck go to an old house, and quickly hide in there when they hear Joe and Emmett arrive. Following up the map's directions, Joe and Emmett were able to dig up a hidden chest filled with gold coins hidden in the house' fireplace. Despite being delighted that he and Emmett found the treasure, Joe suggests that they should wait until after the trial as he intends to lie at the trial to ensure that Muff takes the blame for Robinson's murder. Joe gets Emmett to bury the treasure at Number Two under the cross at McDougal’s Cave while he burns the map, leaving no evidence to claim Muff’s innocence.

Eventually, Joe soon learned that Tom was the last person who had the marble, and confronted the boy himself, threatening to kill him if he tells anyone the truth. This event, along with his friendship with Huck being strained, caused Tom to become hopeless, feeling that he can't do anything to save an innocent man's life without risking his own. However, on the advice on his aunt Polly, Tom finally decides to testify at the trial, feeling that his friendship with Muff is more important than his oath with Huck.

At the trial, Joe blatantly lied to everyone that he went to the graveyard to look at the stars, and that he witnessed Muff getting drunk and stabbing Robinson four times until he was dead. However, this all fell apart when Muff's lawyer Mr. Aycock calls in Tom to the stand, where Tom furiously yet rightfully confesses to having witnessed the murder and exposes Joe as a liar and the true culprit. An enraged Joe hurls one of his daggers to kill Tom (much to the shock of the other attendants), but the latter shields himself with the Holy Bible. The town sheriff furiously attempts to arrest Joe, but the latter escapes the courtroom into the woods.

With the truth of the crime revealed, all charges against Muff are finally dropped and Joe is branded a wanted outlaw. Returning to the tavern, Joe spotted Emmett packing up shovels and picks, accusing him of attempting to take the treasure for himself. Emmett tried to assure that he wouldn't cheat Joe, but the latter refuses to listen and kills Emmett by hurling a knife into his back.

During a festival the next day, a group of children, including Tom and Judge Thatcher's daughter Becky, enter McDougal’s Cave (where Tom and Becky found the corpse of One-Eyed Murrell), only for Tom and Becky to become lost in the process after accidentally causing a cave-in. Around the same time, the town sheriff informed Judge Thatcher and the townspeople of Emmett's death, and that he tracked down Joe's directions heading towards the cave, which made the townspeople realize that Joe has entered the cave with the intention of killing Tom. As such, Thatcher gets several men (including Muff and the sheriff) to arm themselves to save the children and arrest Joe for his crimes.

Joe was able to track down Tom and Becky, who managed to flee away in a tunnel. While letting Becky escape, Tom finds the treasure chest where Emmett hid, only to be confronted by Joe himself. Delighted that he has both Tom and the treasure to himself, Joe attempts to kill Tom by stabbing him, only for Huck to arrive to the rescue by kicking him. Recognizing Huck as Pap Finn's son and the other witness who saw him murdering Robinson, Joe punches Huck and attempts to kill him. However, Tom distracts Joe by holding up the treasure chest, threatening to throw it into a deep chasm if Joe tries to kill Huck. Screaming in horror over this, Joe greedily grabs the chest, but ends up dangling towards the chasm while grabbing Tom's left sleeve to prevent himself from falling. However, Huck manages to grab Tom's right arm while the left sleeve tears off, sending a screaming Joe falling to his death in the chasm.

It later turned out that Tom previously emptied the chest prior to Joe's death so that he can carry the golden coins out with his shirt. Tom and Huck then exit the cave, where they revealed the truth about the treasure and Joe's death to the townspeople, who then praised them for their heroic deeds.

Joe is cold-hearted, cruel, ruthless and very dangerous. Like the stereotypical Native American half-breeds, he is deeply antagonistic towards the town citizens. But he is also greedy, willing to kill people for money and/or treasure. He showed his greed in killing Dr. Robinson, who was trying to take the map to Murrell’s lost treasure. But like all villains, this greed leads to his downfall. When he saw Tom threatening to toss the treasure chest into the cave’s chasm, Joe tried to get it back, only to fall to his doom in the end. 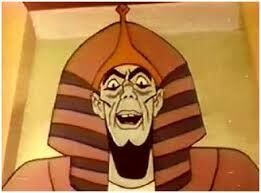 Injun Joe in disguise in The New Adventures Of Huckleberry Finn. 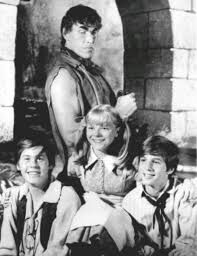 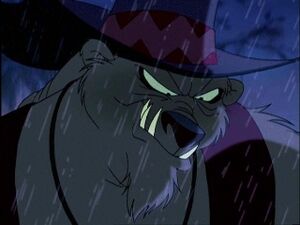 Injun Joe as Injurin' Joe in the 2000 animated film. 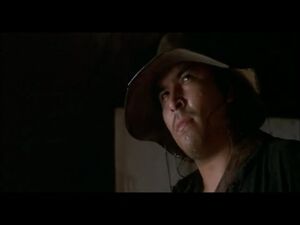 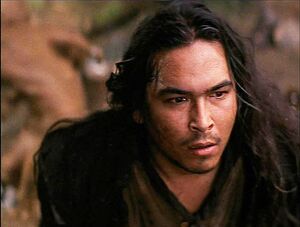 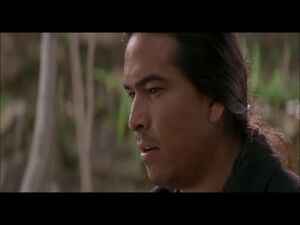 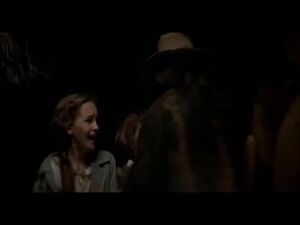 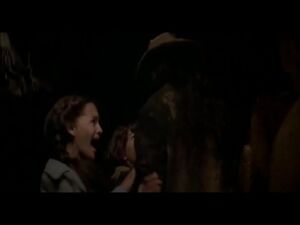 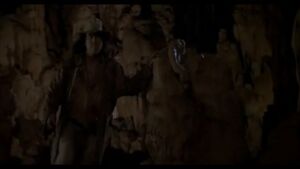 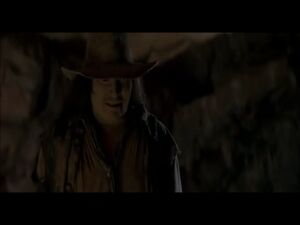