Kill Tom Sawyer and Huckleberry Finn so he can get away with Deputy Bean's murder (failed).

Injurin' Joe (also known as Joe) is the main antagonist of the 2000 direct-to-video animated musical film Tom Sawyer by MGM. He is a massive grizzly bear who is the animal equivalent of Injun Joe, as well Tom Sawyer's arch-nemesis.

He was voiced by Kevin Michael Richardson, and his singing voice was provided by Hank Williams, Jr. (although he doesn't sing like the other characters in the film).

Injurin' Joe is first seen breaking into a church to steal the poor box. That night, while Tom Sawyer and Huckleberry Finn were out treasure hunting, they spot Joe and his henchman, Mutt Potter (the film's equivalent to Muff Potter), raiding a graveyard to uncover a chest of gold. Deputy Bean (the film's equivalent to Dr. Robinson), who was also at the graveyard visiting his wife's grave, notices the two and demands them to stop or they will be sent to jail. As Tom and Huck watch from behind a tombstone, Joe kills Bean by throwing Bean at another tombstone, makes it look as Mutt committed the murder, and captures Tom's pet frog named Rebel. Tom knows that Joe can track him down through Rebel, so he and Huck make a pact never to tell anyone what they have seen.

Later, Tom and Huck visit Mutt, who is on death row. They try to get him to remember Injurin' Joe murdering Bean, but Mutt doesn't remember. Joe finds the boys and attacks them, but they, and Rebel, manage to escape on a raft. Then later, Judge Thatcher sentences Mutt to be hanged, but Huck and Tom testify against Joe at the last minute before Mutt's execution. Angered, Joe chases after Tom and Huck but falls through a wooden bridge and is swept away by the river and over a waterfall, while Mutt is freed and the boys are hailed as heroes.

Joe is revealed to be still alive and appears in the climax, where he tries to kill both Tom and Becky inside a cave. With Huck's help, Tom is able to distract Joe by awakening bats to attack Joe. The ceiling of the cave collapses, causing a large chunk to fall and crush Injurin' Joe. The town celebrates the death of the illegitimate and villainous outlaw as his corpse was floating in the water. 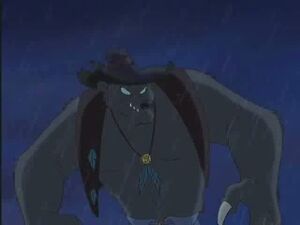 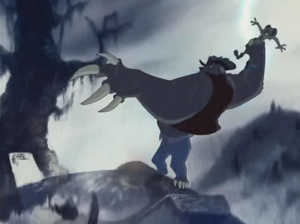 Joe about to throw Bean to his death. 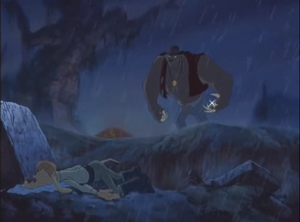 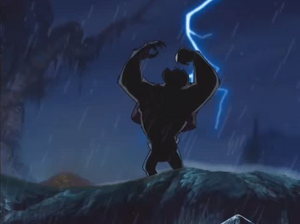 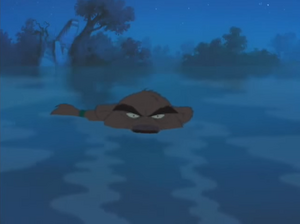 Joe's evil stare after failing to catch up with Tom and Huck's raft. 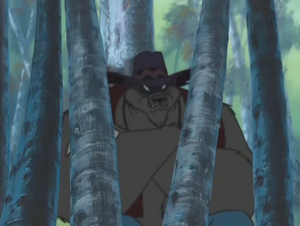 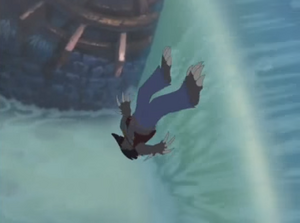 Joe falling to his apparent death. 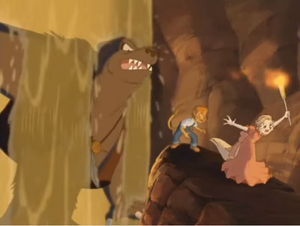 Joe revealed to be still alive. (lost his hat after he fell over the waterfall) 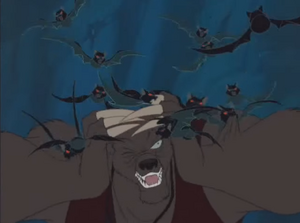 Joe being attacked by bats. 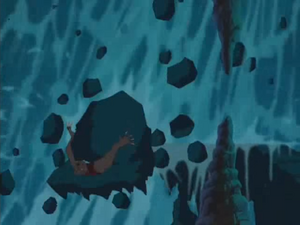