Batman: the Brave and the Bold

Each members possess super powers identical to their Earth-Three counterparts

The Injustice Syndicate is a team of villains from an unnamed reality (similar to Earth-Three), where the morality of its people are reversed (heroes are villains and villains are heroes).

The syndicate battled Red Hood's team of heroes, but they were defeated and Red Hood was forced to escape. They later caught him, unaware that he had allied himself with Batman.

Cornered and alone, Silver Cyclone activated a bomb to destroy the Earth. The Injustice Syndicate ordered him to send the bomb to Batman's world, however Cyclone betrayed them when he reveled the bomb would only destroy all organic tissues and thus preserve himself. Cyclone stated he didn't care for humans and whichever world was destroyed, he would claim it as his own only to be killed by Red Hood shortly later. Batman and Red Hood thwarted the plan by deciding to send the bomb to an Earth unpopulated with life (a zombie planet). 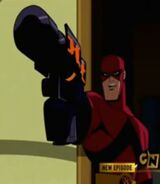 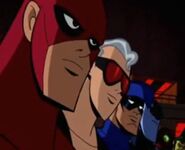