The Worst Criminals in Guanajuato

Eliminating whoever gets in their way.

Committing crimes in the city

Kill Leo San Juan, Valentina and Co.
Leave the city in rubble and continue destroying what they find (all failed).

The Inmate Mummies are the secondary antagonists in La Leyenda de las Momias de Guanajuato. They are a group of undead prisoners for being known to have the worst reputation in town.

While alive, each of these prisoners committed barbaric acts against the society of Guanajuato. When the time came, the authorities detained everyone and locked them up in the local jail.

Time after the arrival of The Ghost-Hunting Team, a strange fire broke out in the jail, killing all the prisoners who were inside. Taking their bodies out of the collapsed rubble they put them in the morge in baskets on a table, waiting to be buried in a mass grave.

In the market, the team is not well received. While Leo is distracted by reading a poster that announces the death of the inmates of the jail due to a fire, Luis scares him. Then it looks like the bodies of the dangerous inmates, killed in the prison fire, get up again.

In the mine, they fall into the network of wagons of the same pursued by the mummies of the inmates. Don Gaspar reappears and gives Leo the lost glass to close the portal. Once closed, the soul of all the mummies recover their original body and ascend to the world of the dead.

At the beginning of the movie, Leo tells his brother how he and Valentina fought with these burned mummies. At the civil registry post at The Black Fair, Teodora pretended to marry Nando while one of these mummies attended to them right there, holding the certificate and a pen for them to sign. The same mummy reappears in another scene, in which it reunites with other illusions created by El Charro Negro, preventing Leo's friends from entering the hacienda. 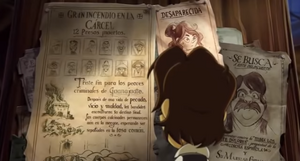 Leo San Juan reading the banner of the prisoners who died burned inside the prison. 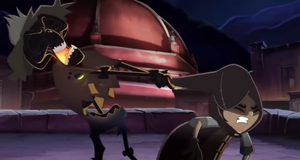 One of the Inmate Mummies pulling the hood of Luis, who turns out to be Valentina. 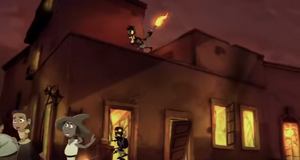 The inmates turned into charred corpses after incinerating the homes of the citizens of Guanajuato. 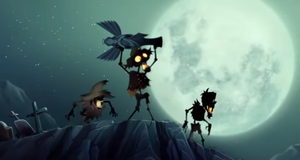 The mummies walking to the cemetery to catch the Ghost-Hunting Team and trying to crush them with monuments. 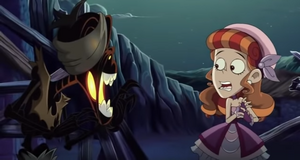 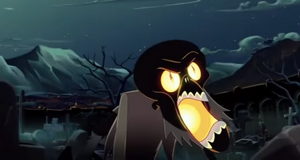 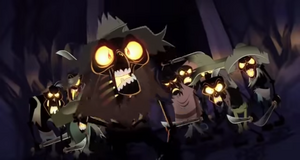 The mummies inside the mine and facet of attack against the Ghost-Hunting Team with his sharp weapons. 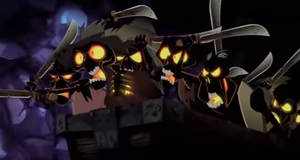 The mummies mounted on a wagon with the plan to kill Leo's friends. 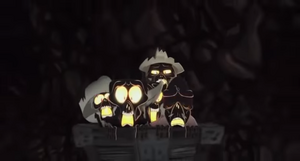 The mummies coming out of the rails of a tunnel, about to hit Evaristo.