Soldier of the Empera Army

Minion
The Inpelaizers are the robotic soldiers of the Empera Army and antagonists in Ultraman Mebius.

A single Inpelaizer arrived on Earth in episode 29. Ultraman Mebius attempted to combat the Inpelaizer but was greatly outclassed by the robot. However, Ultraman Taro appeared and destroyed its top half with the Storium Ray, forcing the Inpelaizer to retreat for repairs.

Alien Empera later deployed 13 Inpelaizers all over the world and threatened the humans to turn over Mebius. Mebius fought and destroyed the Inpelaizer in Tokyo, but two more Inpelaizers appeared shortly after the first one's destruction and both attacked Mebius. GUYS managed to destroy one of them with METEOR while Mebius defeated the other one with the Mebium Dynamite. However, a fourth Inpelaizer soon arrived and, left too exhausted to fight, Mebius retreated, leaving the Inpelaizer stationed in Japan.

The Japan Inpelaizer soon began attacking again, forcing Mebius to destroy it with the Mebium Dynamite, putting Mirai in critical condition. Shortly after, two Inpelaizers set their sights on GUYS' HQ and, without Mebius to defend them, the GUYS members were forced to defend their HQ on their own. They succeeded in destroying one of the Inpelaizers, while the other was slashed in half by Zamsher. With his Inpelaizers destroyed, Empera decided to conquer Earth and destroy Mebius himself. 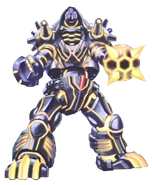