Inque is a recurring antagonist in Batman Beyond. She is a shape-shifting saboteur, mercenary and assassin.

She was voiced by Shannon Kenny.

Inque's origins and background are unknown, but what is known is that she was born into extreme poverty. Her precarious lifestyle eventually instilled in her an obsession with money, which ultimately became her raison d'être, as she turned to a life of crime.

Early in her youth, she had a daughter, Deanna Clay. The identity of the father is not known nor are the circumstances of the child's birth. Because she was being chased by the police, Inque was compelled to remand Deanna to the care of unnamed guardians.

At some point after that, she allowed herself to become a biogenic mutant, allegedly for a substantial amount of money. The details surrounding it remain undisclosed. From that point on, Inque put her talents up for hire and became a corporate saboteur and assassin for very large fees. Her activities before clashing with Batman are unknown, but by then she had become one of Interpol's most wanted and amassed a bank account with "more money you can imagine." Even though she never returned to reclaim her daughter, she always sent money to her trust fund on a monthly basis.

Inque appears taking an assignment from Derek Powers to sabotage a rival company called Foxteca. On the first night, she crept into one of Foxteca's buildings and short-circuited a control panel causing a few floors to explode. On the next morning, she was disguised as a sculpture in Powers' office, and overheard Bruce Wayne's accusatory warning to Powers. She feared he might be onto something, but Powers quickly dismissed her concerns and gave her another assignment.

During that same night, she broke in another Foxteca facility and spread havoc from within. However, this time she was interrupted by Batman, who had been sent by Bruce to look out for the company. Inside, Inque caught Batman by surprise and thrashed him around before fleeing through the ventilation conduct.

Inque later resumed her task and sabotaged a Foxteca harbor. However, this time she was mildly foiled by Batman. Once again she engaged him, but this time he was prepared. Still, Inque was considerably superior in strength and dexterity, managing to repel every of Batman's attacks — she even mocked him, claiming he was not a fast learner. She attempted to flee, but she was surrounded by water, which made escaping more difficult. Batman quickly caught on to her vulnerability and Inque was forced to tear the ground apart, causing Batman to fall down the dam.

On the next morning, Inque reported back to Derek Powers and witnessed his delicate condition once he ascertained that Batman had been running interference. She also told him he had an accomplice, because she heard him talking to someone over a comlink. Powers then told her to kill them both for all the money she wanted. Inque was delighted and remarked how much she enjoyed working for him.

Inque once again wrecked a Foxteca building, but this time as a means to distract Batman while she snuck on to the surface of the Batmobile so she would be taken to the Batcave. There, the extra weight she laid on the Batmobile was detected by the Batcomputer. The detection was too late, however, and she tackled Batman before he could defend himself. Inque wasted no time and attempted to suffocate Batman by pouring herself down his throat. She would have been successful, had Bruce not doused her with water.

She quickly recovered and cut off the end of the fire hose. She then headed upstairs, but was blocked by metal door, which when she tired to get through, released an electric charge. Relentlessly, she tried to bring the ceiling down and then attempted to squash both Batmen with the giant penny. Terry was under her grasp, but he quickly shocked her with another discharge. Aggravated, Inque trashed a few rogue's displays. When she lunged at Terry, he used Mr. Freeze's gun to immobilize her. Inque broke down into pieces of ice, which were then delivered to Police Commissioner Barbara Gordon in a giant bag.

Subsequently, Inque was transferred into Gotham Cryogenics, where she was held captive in a block of ice and supervised by Aaron Herbst. Despite being immobilized, she retained consciousness, and as a result, she could see and hear her curator's incessant nattering and moaning about his pitiful life and his love for her. After being fired for inappropriate conduct, Aaron cut off the power source to Inque's cryogenic prison out of spite for his employers. Inque broke free, and quickly took over the entire facility, holding its employees hostage. She tried to sneak out in the shape of a trench coat, but was made out and intercepted by Batman. Inque seized a moment of mayhem to lunge at the freeze gun and break it. However, she was still outnumbered by the GCPD, so she fled through the storm drain system.

Apparently, Inque's frozen state had damaged her DNA, and as a result she lost the capacity to revert to her human form. So, Inque turned to Aaron, and exploited his infatuation with her to enlist his help. They broke into Fulton Labs and gathered all the necessary components to restore her. Moments before leaving, Inque was attacked by Batman, and the ensuing battle destroyed most of the laboratory. She attempted to smother Batman in her bosom, but he broke free. Inque was then ensnared in a special electrical batarang, but was rescued by Aaron, who surreptitiously overpowered Batman. Inque decided then to take up her old assignment to kill Batman, but first wanted to draw out his collaborator, Bruce Wayne (whom she called "the old one").

She took Batman to the old Gotham Hills Arena, and there, she brewed a concoction that repaired her deficiency. After seeing Terry talk to Bruce over his comlink, she pulled him in close so her invitation could be heard back at the cave. She threatened to kill Terry if he didn't show and kissed Terry to stop him from telling Bruce not to come. When the time came for Aaron to claim his promised reward, Inque injected him with half of the treatment that would give him the shapeshifting powers he so craved, turning him into a liquidated being.

When Bruce came to Terry's rescue, Inque ensnared him and tried to squeeze him. However, Bruce had secretly donned an exosuit before the battle and the two fought. Despite initially being taken off guard, due to the surprise appearance of the exosuit and the sheer strength it offered the elderly Wayne, she still managed to damage the armor, and had the advantage until she was interrupted by Aaron, who sought revenge for her betrayal. The fight gave Batman the chance to break free of his shackles and smash a skylight, allowing the rain to fall on her, diluting her into the sewers, despite her desperate attempt to reach the stabilizing chemical.

However, Inque survived and as soon as she recovered, she went back to her old ways. She was hired by Winchell to sabotage his own satellite launch at Shimano Space Center. The commotion she caused drew the attention of Batman, who was patrolling the skies. He tried to thwart her, but Inque exhibited new skills, claiming to have learned from their previous clashes. She managed to break free from an icy prison and completed her mission.

Later on, Inque met with Mr. Winchell to collect her fee, but she was double-crossed and blasted with a particle destabilizer gun. Though severely weakened, Inque managed to escape. With no other place left to go, Inque turned to her estranged daughter, Deanna Clay. She explained to Deanna why she had to leave her when she was a baby, and Deanna took her in.

When Inque's condition began to deteriorate, she convinced Deanna to steal mutagen from Gotham Genetics. Inque was swayed by Deanna's daughterly care, so she trusted her with her personal account codes. Little did she know, Deanna would use the codes to steal all her amassed wealth before trying to kill her altogether. Later that night, Batman managed to trace Inque to Deanna's apartment and tried to bring her in. Deanna arrived on time with the mutagen, which Inque injected on herself, immediately stabilizing her genetic makeup.

Fully recovered and visibly stronger, Inque fought Batman in an intense battle. She had him subdued until her body began to blister and dissolve. Deanna told her she had combined the mutagen with a solvent agent and that she did it for the money. Inque mustered enough strength to attack Deanna, but Batman deflected her. In her final breath, Inque asked her daughter how she could have turned out like that after all she had been given, with Deanna coldly replying that all she ever gotten was money, then asked what she expected her to become before Inque finally evaporated into thin air.

However, Inque managed to survive this ordeal, but it remains unknown whether or not she took revenge on her daughter. What is known is that she did watch her daughter from out of sight with an angry glare, making Deanna fearful for her own life.

Shortly after, Inque was commissioned by an unknown employer to steal a prototype battle pod. She broke out from the Military Research & Development operating the vehicle, but Batman had been waiting for her, and set off in hot pursuit. He fried the pod's circuitry, forcing it to plunge into Gotham's Bio Park. Taking the guise of a sea lion, Inque attempted to elude capture; but to no avail. During the battle that ensued, Inque entangled a bystander, whom she threatened to squeeze (and presumably crush) unless Batman retreated. However, that bystander was in reality Superman, who splattered Inque all over the place with centrifugal force. Inque tried to reconstitute herself, but Batman stomped on her. Dizzy and worn out, Inque yielded and was presumably turned into the authorities.

She later joined the Inquity Collective at some point in the future to battle Justice League Unlimited.

A different version of Inque appears in the 2015 Batman Beyond comic series working for Brother Eye, being forced to serve him in order to prevent him from killing her daughter Deanna. This version of Inque later switches sides and allies with Batman to fight against Brother Eye, and even becomes the one to destroy his android-based central consciousness, killing Brother Eye but sacrificing herself in the process. 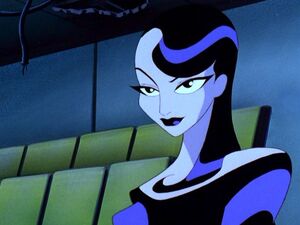 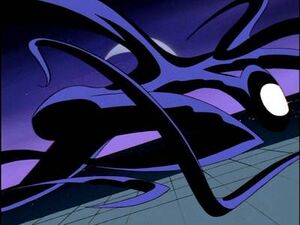 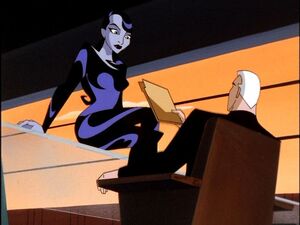 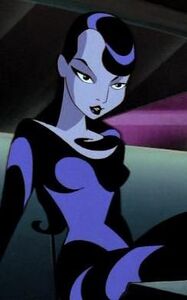 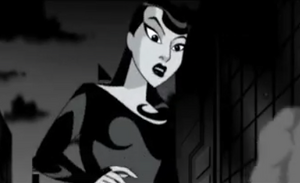 Inque seen in a flashback in Justice League: Unlimited.

Inque being washed away.

Inque returns to her old doings.

Inque and Deanna sharing a moment. 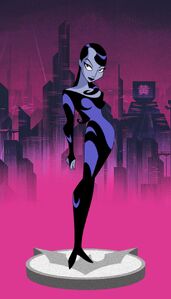 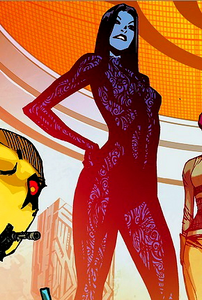 Inque's appearance in the 2015 comic. 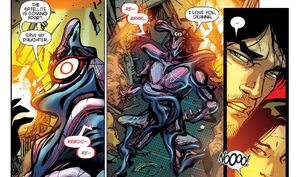 Inque saves Deanna's life at the cost of her own life (in 2016 comic). 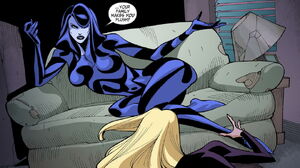 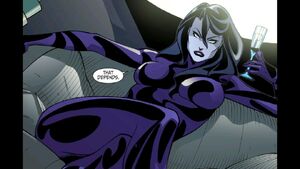 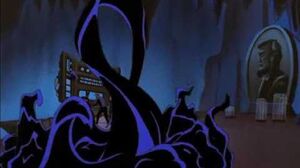 Batman Beyond Inque discovers the Batcave 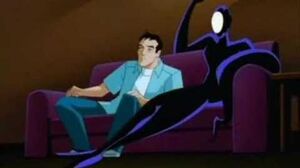 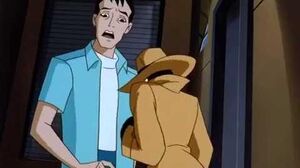 Batman Beyond Inque's most hilarious moment 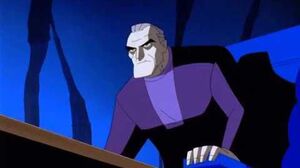 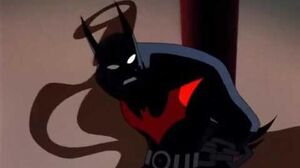 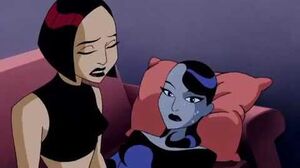 Batman Beyond Inque visits her daughter 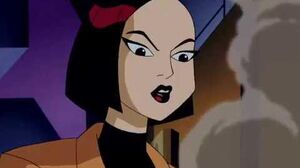 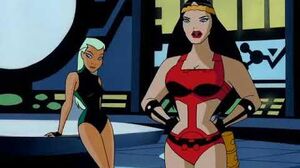