Regain his standing as a top duelist.

Getting revenge on Yugi Muto for humiliating him.

Insector Haga (or Weevil Underwood in the 4Kids dub) is a major antagonist of the Yu-Gi-Oh! franchise. He is a duelist whose deck is based on Insect monsters, as well as an unrepentant cheater ready for the worst in order to stand on the top. In fact he never cheats during duels though beforehand such as throwing his opponent's Exodia cards, sneaking cards into his opponents decks and likely stacking his deck etc. After gotten humiliated by Yugi Muto, he and Dinosaur Ryuzaki (his best friend and partner in crime) determined to get their revenge on both Yugi and his best friend, Joey Wheeler (Katsuya Jonouchi in Japanese), for humiliating them in Dueling Kingdom.

In Japanese version, he was voiced by Urara Takano in the Japanese version, who also voiced Illumi Zoldyck in Hunter x Hunter, and Belarus in Hetalia: Axis Powers. In English 4kids version dubbed, he was voiced by James Carter Cathcart otherwise known as (Jimmy Zoppi) who also voiced Meowth, James, Mayor of Trovitopolis, and Butch, in Pokémon series, Lumis in the same series, and Marshall D. Teach in One Piece, and Brian Zimmerman, who also voiced Rex Raptor, Lumis, Bandit Keith, Pegasus J. Crawford, Yami Marik, Paradox Brothers, Arkana, Gansley, Lector, Odion Ishtar and Nesbitt in the same series, and Crocodile, Arlong, Daz Bonez, and Wapol in One Piece.

When Yugi and Jonouchi first meet Haga, he seems humble and good-natured in contrast to his friend Rex Raptor. However, in truth, Haga relies on underhanded tactics such as how he managed to pull Yugi into the forest so his insect monsters could get the field power bonus, in the hopes Yugi would not have the same advantage.

A key indication that he is an antagonist is the fact that part of his English dub name has the word evil in it. Though he is usually far from sinister or dastardly, he is smug and aggressive.

Haga was the Japanese champion, defeating Dinosaur Ryuzaki in the finals. Though it is later revealed that he won his duels through lies and cheating, plus Ryuzaki mentions that he threw his duel with Haga.

He entered Pegasus J. Crawford's Duelist Kingdom tournament. In his first interaction with Yugi Muto, he acted polite and friendly in order to gain his trust and was given his Exodia cards.

He then immediately threw the cards over the edge of the boat into the sea to prevent him from using them. (This pretense of politeness is much more believable in the original Japan version than in the dub, when he sounds downright sarcastic and untrustworthy). Katsuya Jonouchi was only able to recover two of them. Yugi immediately decided to duel Haga first, risking his one Star Chip as well as his deck against Haga's two Star Chips. (In the manga, Yugi bets his life.) Yugi defeated Haga when he destroyed his Great Moth with his Daemon's Summoning and the Japanese champion was eliminated from the tournament and kicked off the island. Jonouchi took his dueling glove.

In the aftermath of Dueling Kingdom, Weevil and Rex lost all their popularity and many people making fun of them. They were beaten by the three bullies who are helping the boy to get his card from them.

Haga entered Kaiba's Battle City tournament in Season 2, with a new card, Insect Queen, more rare and powerful than his Great Moth. He promised a kid a rare card if he put a Parasite Paracide card in Jonuchi's deck but doublecrossed him and sprayed him with arachno slime. Jonouchi dueled him, believing that he had stolen the kid's cards and was unaware that the kid was working for him until he discovered the Parasite card, which turned all his monsters into insects and prevented them from attacking (due to Haga's Insect-Repellent Barrier), but his Gearfried the Iron Knight was unaffected and Jonouchi defeated Haga, taking his two Locator Cards and kicking him out of the tournament.

In Season 4, Waking the Dragons, Haga and Ryuzaki attempted to steal Yugi and Jonouchi's rare cards but were challenged to a duel by Gurimo, who beat them and took their souls. They were released after Yugi defeated Gurimo. Haga and Ryuzaki snuck aboard during Yugi's trip over to Pegasus' castle in the hopes of finding rare cards and tried to get an Orichalcos card from Rafael, becoming two of Dartz's henchmen after hitchhiking aboard Rafael's helicopter. Haga dueled Dark Yugi on top of a train, where he crossed the Moral Event Horizon by tearing up a card and claiming that Yugi's soul had been trapped inside it (thereby murdering him), then sadistically revealed that he had been joking; the card was a merely a common Insect monster card. Enraged, Dark Yugi eventually defeated him by overkill. His soul was taken by the Orichalcos and was released when Dartz and the Orichalcos God were defeated.

In the first half of Season 5, Grand Championship, Haga and Ryuzaki entered Kaiba's tournament as one duelist and dueled Zigfried von Schroeder, who easily defeated them with his Valkyries.

In the second half of Season 5, Dawn of the Duel, Haga and Ryuzaki stole Yugi's Millennium Items and Egyptian God Cards (only going after the latter) but ran into Dark Bakura, who knocked them out (sent them to the Shadow Realm in the 4Kids version) and returned the cards and items to Yugi. They suffered a lot of the consequences of Zorc ravaging the past but survived it all. 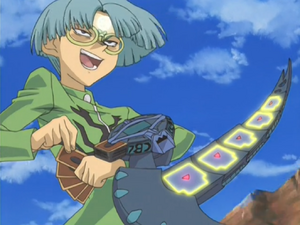 Haga with a Chaos Duel Disk and using the Seal of Orichalcos.