Spying on people who he suspects are criminals.

Tragic Gaoler
Inspector Javert is the main antagonist of Victor Hugo's Les Miserables and the subsequent musical and film adaptations, even including a 2007 anime called Les Miserables: Shoujo Cosette. He is a French police inspector who devotes himself completely to the law and follows it unflinchingly.

Javert was born inside of a prison to a fortune-telling mother and a galley-doomed father. Javert was sharply influenced by this upbringing and was taken in and educated by the police force. While there, he developed a philosophy that was centered around respect for authority and hatred for rebellion of all kinds (which includes crime). He believes that all criminals will stay criminals, and all law-abiders will stay law-abiders. He then began working at the jail where Jean Valjean, a convict who stole bread to feed his nephew and broke window in the process, is being held.

He is later promoted to police inspector, where he arrests Fantine (a woman who became a prostitute to pay for her sick child) but is stopped by Valjean out of mercy and compassion, who at this point took the identity of another person and became mayor. This, and other triggering events lead Javert to recognize the mayor as Valjean, and he files a report to the Chief of Police to have him arrested. But, when another man is falsely convicted of being the escaped convict, and unknowing Javert confesses his actions to the real Valjean and asks to be removed from his position. Valjean forgives him and confesses that he is the real Valjean to the court before leaving to search for Fantine's child.

Years later, Javert becomes a spy for the French monarchy to stop the June Rebellion. He is caught by the rebels and is saved and forgiven again by Valjean, who is there to save the life of his adoptive daughter's boyfriend. Stricken by this kindness, Javert agrees to help return and injured Marius to his home; however, Javert warns Valjean that he will still arrest him and Valjean agrees. However, when Valjean exits the house, Javert has disappeared, having left in complete emotional turmoil. Seeing that Valjean has proven that criminals can break the law but still be good people and redeem themselves, Javert's thinking process is put to a grinding halt; if he arrests Valjean, he will act lawfully but immorrally at the same time, and vice versa is he allows Valjean to go free. Unable to resolve his dilemma, which suggests to him that a superior moral system exists, he commits suicide by drowning in the river Seine.

Javert is a strict formalist, leading him to believe that mercy, kindness, and forgiveness are unreasonable. He is brutally honest, and firmly believes that he is benefiting society by arresting criminals. He is suspicious of everyone and he spies of people constantly. His memory is remarkable and he is well educated for his time, and he reads in his free time. He is strict and severe with everyone, especially himself. He is cold and stoic in his work, and while his is usually humorless—it is said that Javert lets out a loud and heavy laugh when he does actually find something funny. He convicts criminals without mercy or emotion, because all criminals are considered threats to the good members of society.

His high expectations are also his biggest flaw. Because he refused to think that Jean Valjean reformed, he wasted years of his life tracking down someone all because they stole a loaf of bread. This shows how dedicated yet tragic Javert is despite his unforgiving personality. His view that everyone can become a criminal turned him into one himself. Despite this, upon death, he did realize the error of his ways. 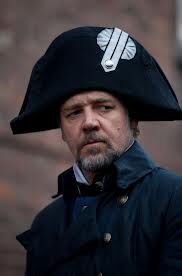 Russell Crowe as Javert in the 2012 movie. 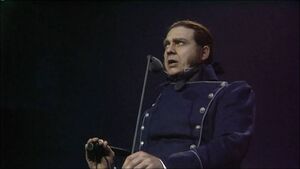 Philip Quast as Javert in the tenth anniversary musical. 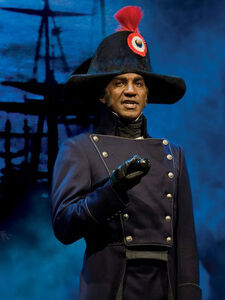 Norm Lewis as Inspector Javert in the twenty-fifth anniversary musical. 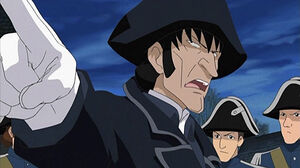