The Insurgence Team are an antagonistic group in Smallville.

They were a team of professional corporate saboteurs that had been hired by Lex Luthor to plant listening devices inside the LuthorCorp offices in Metropolis, allowing Lex to spy on his father Lionel Luthor. The team consisted of Kern, Pine, Nicky and Bishop.

Lex Luthor hired the team after he discovered listening devices in his own office at the Luthor Mansion and confronted his father about it but he denied the accusation.

When Lex learned that Lionel and his assistant Martha Kent were in the office, he called his team to call off the operation, but unknown to Lex, the team has decided to become burglars.

During their operation to bug the LuthorCorp office, Kern and his team discovered that both Lionel Luthor and Martha Kent were in the building.

Kern told the others to abort the mission, but Pine took control of the operation, intending to burgle the office and steal the contents of Luthor's vault. Kern protested this but Pine shot him.

After murdering the team's leader Kern, Pine took command and held both Lionel and Martha hostage while his team broke into Luthor's private vault. Bishop manged to open the vault and the team expected to find money or something of obvious monetary value.

Instead within the vault were just confidential files and a pile of meteor rocks that had been cut into bars and an octagonal disc. What the group didn't know was that the bars were made of meteor rocks and that LuthorCorp had been studying their properties and effects.

Clark then storms the building trying to find Martha and confronted Pine and his team, but the presence of the Kryptonite weakens him. While Pine was distracted threatening Clark, Martha wheels the trolley of Kryptonite back into the vault and closes the door. Pine tries to stop her, but gets his arm caught in the vault door.

As Martha went to her son, Pine grabbed a power drill and threatens to bore through Lionel's skull. With the Kryptonite back behind the lead-lined vault door, Clark used his super-speed to disarm Pine. At that moment, Lionel takes the opportunity to seize Pine's gun and shoots him dead. 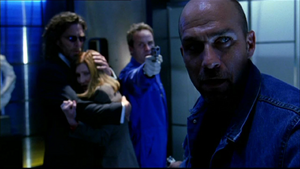