Armed with technology supplied by the New Gods of Apokolips

Destroy Superman and all superheroes they come across.

Serve Darkseid and help him to enslave all in the universe (both failed).

Intergang was a nationwide criminal organization that is headquartered in Metropolis.

Throughout one incarnation to another, Intergang was run by various crime lords and armed with Apokoliptian weaponry and technology supplied by the evil New Gods of Apokolips.

Due to being based in Metropolis, Intergang clashed frequently with the city's superhero, Superman.

In Earth-One, Intergang was run by gangster Bruno Mannheim and aided by Darkseid, who was using the organization to track down the Anti-Life Equation. The organization also worked with Morgan Edge, the president of the Galaxy Broadcasting System.

However, it was later transpired that "Morgan Edge" was actually a clone of the real Morgan Edge created from the Evil Factory. The Morgan Edge clone was destroyed after being mistaken by Intergang for the original.

Morgan Edge was the leader of Intergang, until he suffered a heart attack due to stress. While he believed he was working for Darkseid, his Apokoliptian contact was actually Desaad, whose only aim in supplying him with weaponry was to cause suffering.

While he was in hospital his legitimate businesses were taken over by his father, Vincent Edge, and Intergang was taken over by Bruno Mannheim, who trained on Apokolips with Granny Goodness (a later retcon would say that Mannheim was the original leader of Intergang, dealing knowingly with Desaad. How Edge took over is unrevealed.).

Eventually, Intergang was brought down by Daily Planet reporters Clark Kent and Cat Grant, Mannheim was arrested, but managed to escape. He attempted to disappear through a Boom Tube, but it collapsed when he was halfway through.

Some time later, Mannheim's father, Boss Moxie, a gangster who had been in prison since the 1940's, after being captured by the Newsboy Legion, was released and led Intergang.

Discovering that the Newsboys were, seemingly, the same age as when he first fought them, he determined to find out how such a thing could be.

Meeting renegade Project Cadmus geneticist Dabney Donovan, he arranged for himself and his former gang members from the 1940's to be cloned into youthful bodies with superpowers. Using Vincent Edge to arrange a meeting between Metropolis' gang-leaders, he killed them all, and declared himself the new head of Intergang.

The new Intergang spent much of their time tracking down Jimmy Olsen, whom Moxie believed knew Superman's secret identity.

Following a short-lived attempt by Morgan Edge to regain control, Lex Luthor gained control of Intergang, retaining Moxie as a figurehead. Moxie and his lieutenants were later captured by Superman. When last seen, Intergang was run by a criminal cyberneticist named Frank Sixty.

After roughly two months since the Infinite Crisis, Boss Moxie was slain during the Crisis at the hands of the insane Superboy-Prime, and as a result Intergang's leadership was returned to Bruno Manheim.

Under Manheim, Intergang expanded its operations into other nations such as Oolong Island (where Bruno transferred kidnapped "mad scientists" to Chang Tzu's Science Squad), Bialya and Yemen, include operating a mining company called Ridge Ferrick in regions such as Australia, and reorganized along quasi-religious lines devoted to the "Religion of Crime", complete with a "holy" text known as the Crime Bible.

Manheim intended to have Intergang to exalting the power of crime as the dominant order in the 21st century and attempting to take over America. He planned to turn Gotham City into an Apokoliptian fire-pit which involved the sacrifice of Batwoman, but was stopped by the second Question and Nightwing.

As a consequence of most of Earth's supervillains being exiled by the U.S. government, Intergang tried to take control of the Gotham City underworld, becoming involved in a gang war with Tobias Whale and the Penguin. Ultimately it was successful, and placed Johnny Stitches in command of Gotham as the capo di tutti capi. 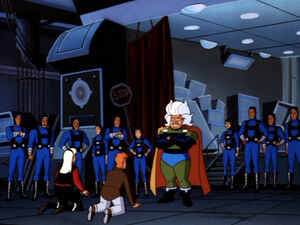 Granny with Intergang in Superman: The Animated Series. 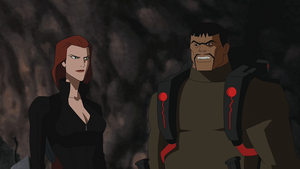 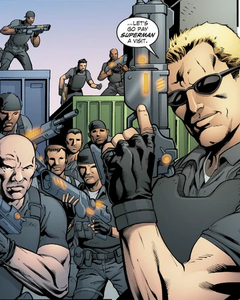 Intergang in the Smallville Season 11 comic. 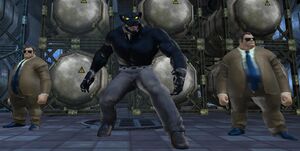 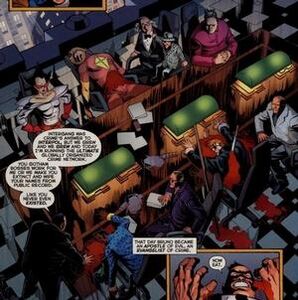