Enforce the rule of the United Colonial Nations,

Anti-Villainous Enforcers
The Interplanetary Stratgeic Alliance (ISA for short) is the main protagonist faction in the Killzone series and is the military police of the United Colonial Nations and enforces its rule over the colonies. Despite being the protagonists however, the ISA is criticized by many Killzone fans of being the "True" villain in the Killzone Franchise despite the warmongering Helghan Empire and blame them for the Helghast's rise to power.

The ISA was founded in 2133 in response to the lack of contact that the UCN had with the other human colonies outside of the Solar System. Following many insurrections from human colonists to resist UCN rule, the UCN had created the ISA in an effort to protect the Colonies and enforce the UCN's rule. This lead to other bitter resentments and soon it spilled over when in 2199 the Helghan Corporation launched an insurgency against the UCN and the ISA to acheive freedom from UCN rule starting the First Extrasolar War. The war ended in 2204 and soon all Helghan Corporation colonists fled to Helghan and the ISA was ordered to blockade the planet by UCN orders and prevented any form of help from reaching the planet causing the rise of Fascist dictator Scolar Visari and the establishment of the Helghan Empire in 2347.

ten years after the rise of Visari, the ISA planet of Vekta had tried to reach diplomatic peace with Visari but failed miserably and then in 2357 the Helghast Military now newly rebuilt and ready for war had launched a massive invasion of Vekta and started the Second Extrasolar War. The invasion had began when ISA General Stuart Adams and Dwight Stratson had disabled the Orbital Defense Platforms and allowed the Helghast Army to invade and ravage Vekta. Helghast troops lead by General Armin Metrac had devastated southern Vekta and slaughtered untold Vektan civilians. in 2359 the Helghast Forces had finally managed to retreat but were soon forced back into war when the ISA had began to invade Vekta in Operation: Archangel.

In 2359 the ISA Army had amassed large armies of troops and were sent to Helghan during Operation Archangel to remove the Helghast ruler Visari from power following the end of the war in Vekta. ISA Forces were ready to go when Visari made a statement ready to obliterate all who dare attack the homewolrd of the Helghasts. Within hours, the Invasion Fleet was torn apart as Anti-Air defenses on the planet's surface had devastated the cruisers forcing the ISA Marines to land and suffer heavy casualties upon landing. Eventually the ISA Forces reached Visari's Palace after a fierce firefight between ISA Marines and a small squadron of Helghast Soldiers led by Mael Radec. Visari was then killed but then the Helghasts launched a massive counter attack and soon the ISA Forces retreated from Helghan leaving many behind.

Six Months after the disastrous attack on Helghan, the remaining ISA Forces were isolated in camps in the planet's jungles and were awaiting evacuation from Earth. Helghast soldiers then began to pick them off one-by-one until finally they found their camp and destroyed it and killing most of the survivors. The remaining survivors were then taken to a Stahl Arms Facility and were about to be executed when Sev and Rico saved them and started a massive prison riot. 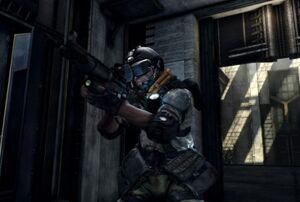 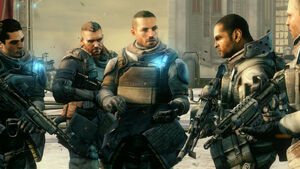 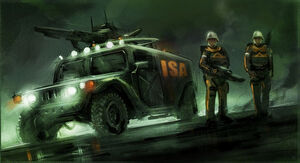 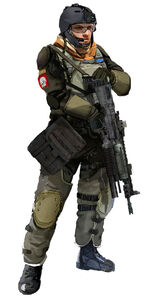 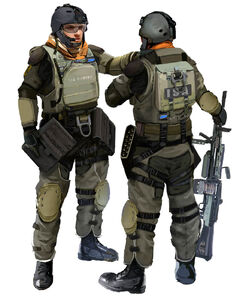 Retrieved from "https://villains.fandom.com/wiki/Interplanetary_Strategic_Alliance?oldid=4258192"
Community content is available under CC-BY-SA unless otherwise noted.