Purge Humanimals of planet Alden (formerly known as Earth) in preparation for human race's arrival to the planet.

The Invasion Force are the main antagonists of the first major Extinctioners story arc and are the ones responsible for the formation of the team itself - although in early depictions of the series the Invasion Force had strong elements of the trope known as "Humans are Bastards" the series creator has stated that he doubts all humans are universally "evil" (in fact they are officially shown to be diverse, since the series Androzons has benevolent humans and has crossed over with Extinctioners a few times).

The Invasion Force's use of extreme force is widely seen in the comics and due to the comic catering to older audiences the brutality of the regime is not often shunned from (in an infamous panel the Invaders destroyed an entire space-station, while an infant watched in fascination, unaware it's death was imminent).They have also wiped out entire planets (as befell Alden's "sister" world, Eden) and are most infamous for kidnapping and enslaving the natives of Alden that display superhuman powers (known in-universe as hybrids).

Prisoners are stripped naked, often forced to wear mind-collars that inhibit the use of their hybrid abilities and are frequently forced to perform horrific acts to prove loyalty to their captors (for example Vague was forced to drink the blood of Terrorbull to prove her loyalty and also had her face scarred to mark her as a "Tracker" - her family was also ruthlessly executed (save her young sister, Alley-Cat) ).The Invasion Force have also frequently conducted Frankenstein-like experiments on Earth animals, creating mutants such as Micro and Warfare (both of whom rebelled and view their former masters as "evil").

The most prominent members of the Invasion Force so far next to Noah Adam Mahn are the Hunters and the favored tools by which the invaders abduct Alden citizens is the Omega Hunters - Sentinel-like robots that are designed to resemble human skeletons.This skeleton-motive is also seen in low-ranking members of the Invasion Force, who were called "Skull Hunters" as a result in earlier issues - many "Skull Hunters" were not human, being either cyborgs or advanced machines.

The current goals of the Invasion Force is to prepare Alden (formerly known as Earth) for the return of the human race, which also involves the mass-murder / enslavement of the current dominant life-forms of that planet, who happen to be hyper-evolved animals.. the reason behind this is unknown as yet but is likely to do with Mahn's extremely xenophobic ideals and many within the Invasion Force share the common view that the planet belongs to humanity, even though it has long since been taken over by new life forms. 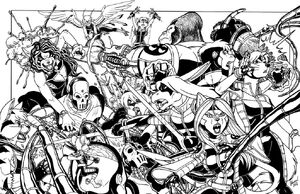 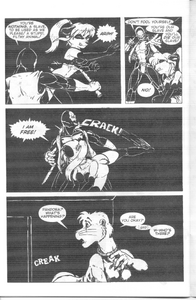 Add a photo to this gallery
Retrieved from "https://villains.fandom.com/wiki/Invasion_Force?oldid=2854540"
Community content is available under CC-BY-SA unless otherwise noted.