The Invincatron is the central antagonist of the animated film Tom and Jerry Blast off To Mars - a parody of giant monsters and alien invaders this colossal robot was activated by Martians after a misunderstanding (largely caused by Tom's (accidental) destruction of the Martian city) led them to believe Earth was trying to invade Mars.

Thus the Invincatron headed off to Earth and once arriving began its task of literally "cleaning up" the planet, sucking up any humans it came across via a large vacuum and storing them in a giant sack.

Presumably to be sent back to Mars or simply kept indefinitely as prisoners (due to the cartoon nature of Tom and Jerry it was unlikely it had fatal plans for its captives, despite this it was still by far the greatest threat in the entire movie). Ultimately the Invincatron was defeated by a combination of Jerry and Spike the Bulldog.

Its captives set free and the misunderstanding between Earth and Mars presumably resolved off-screen, by the end of the movie the Invincatron ceased to be a threat to mankind but its hollow shell was used by Spike to exact revenge on Tom (in this particular case the rampage was allowed, since Tom (unlike the innocent humans) was seen as an acceptable target and Spike had destroyed the evil A.I. within Invincatron, rendering the robot little more than a suit of giant armor). 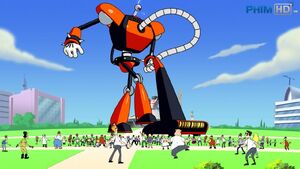 Retrieved from "https://villains.fandom.com/wiki/Invincatron?oldid=3263153"
Community content is available under CC-BY-SA unless otherwise noted.