Usurper king of the bears

Maintain his lordship over the bears.

Iofur Raknison is a major antagonist in the 1995 young-adult fantasy book Northern Lights by Philip Pullman, the first in the trilogy His Dark Materials. He is the usurper king of the bears in Svalbard, in the North, and Iofur has wormed his way onto the throne. Of course, it is somewhat a legitimate claim because Iofur is indeed a prince. However, he used treachery to get what he wants.

In the 2007 film adaptation, he was voiced by Ian McShane, who also played Tai Lung in Kung Fu Panda, Dr. Brinkman in Agent Cody Banks, Leigh Emerson in American Horror Story: Asylum, Winston in the John Wick film series, and Blackbeard in Pirates of the Caribbean: On Stranger Tides.

In the 2019 TV Series His Dark Materials, he was voiced by Peter Serafinowicz, who also played Pete in Shaun of the Dead, the Agency Director in Rick and Morty and Darth Maul in Star Wars Episode I: The Phantom Menace.

Iofur Raknison was shown to have once been a good friend of Iorek Byrnison's when things were good, and then Marisa Coulter arrived and she flattered and charmed Iofur, much like her own daughter Lyra would do decades later. Marisa Coulter used her contacts in the Church to maintain a grip of power on Svalbard, and persuaded Iofur the bears were savages and had to be civilized. Marisa Coulter then had Iofur imprison any of her enemies who sought to crush the General Oblation Board and its hate of Dust. Iofur imprisoned prominent scholars in his dungeons, including Professor Jotham Santalia, the cosmology teacher at Jordan College. When Iofur was young, he killed another bear he met on the ice. The bear turned out to be his father. He kept his father's death a secret from the bears.

Iofur was very ambitious. The days before he became king he poisoned a young male bear's mind into not giving way when things got rough, he gave him poisonous herbs, and Marisa Coulter is revealed to have been behind this treachery. Iofur was deeply in love with Marisa Coulter, despite their different species, and he would do anything for her. Iofur got the young bear he'd poisoned in an argument with Iorek, another prince, and he made Iorek and the bear fight each other over a female bear they wanted as a bride, and Iorek ended up killing the other bear, because the drugs told the young bear not to retreat. Iofur became king, and banished the young Iorek into exile. Iorek went willingly, because he had committed murder, so he thought, and exiled himself. Iofur promised that if Iorek returned, he'd be good as dead.

Iofur is shown to have reigned for some time when the book starts. The professors first mention Iofur and laugh about his ineptitude, and his ambitions at aligning human and bear culture. The professors show disdain for Iofur's ambition to have Svalbard palace like a college, and Iofur has "polluted Svalbard." The mention of Iofur confuses Lyra, because she thinks he is human, as the men are saying he wants a daemon (one's spirit) and Lyra is confused because all human men have daemons, so why would Iofur want one. Later, she finds he is not human, but a bear.

When she frees Iorek from captivity and exile, Iorek tells Lyra about Iofur and how he was banished. Iorek's human friend Lee Scoresby says Iofur is on the lookout for Iorek and he would incinerate him before he got in. But when Lyra and Scoresby are attacked by cliff ghasts over Svalbard, Lyra and Iorek are thrown from the hot air balloon and Lyra is forced to let herself be captured by the armoured bears.

Lyra is led to the domain of the armoured bears, the capital of Svalbard, and it is revealed to have gone decrepit under Iofur's rule. Bird guano stains the place and it is so perfumed to hide the smell one can barely breathe. Lyra is thrown into a dungeon (whereas in the film she is brought straight to the throne room) and she meets the professor Santalia who tells her how he was betrayed by Marisa Coulter and the Palmerian Professor. Lyra is left there but then she works out a plan, and begs the bears to take her to the throne room. The bears are easily manipulated because of Iofur's human ambitions and he has abandoned the bear nature. So Lyra is taken to the throne room.

Inside, Iofur is revealed in his splendour. He asks Lyra what she wants and she says its something about daemons. He clears the room, and Lyra says one of the biggest lies of her life, that she is herself a daemon, and she is Iorek's. Lyra knows Iofur is too confused from killing her then and there but she compounds the lie. Iofur is angered but Lyra says another greater lie, that if Iorek is killed by Iofur then Lyra would become Iofur's daemon instead.

Iofur is pleased by this, so he does what he'd never have done before, he allows Iorek into Svalbard and orders a death battle.

Iofur dresses in his impressive, shining, polished armour and lethal spiked helmet while Lyra sees how Iorek's old battle-worn armour wouldn't protect him nearly as much. She goes to "encourage" Iorek at Iofur's command and she tells him the truth that she betrayed him. Iorek reassures her that a fight with the false king is all he really wanted and takes Lyra as his own daemon as he enters the fight. both of them posture and roar with their opening charges and the fight begins, looking like small tsunamis crashing against each other with astounding power and damage. It soon looks like Iorek is spent, as all he manages to do is loosen Iofur's armour while Iofur has scored multiple wounds-though he pretends to be more hurt then he is, Iorec lures Iofur into a false sense of victory, and then strikes the moment Iofur gets cocky and lets down his guard, and with one powerful swipe of his right paw, Iorek rips off Iofur's jaw mid-battle cry, sending it flying across the ice. He then wastes no time, easily killing the shocked king by breaking his vertebrae with a powerful neck bite. He later eats his heart, as ancient bear custom dictates. 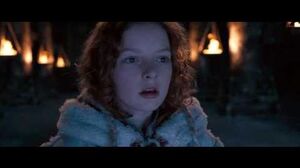 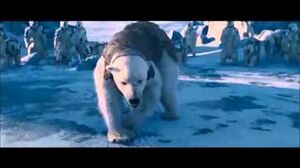 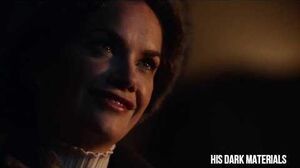 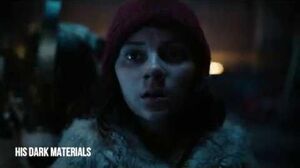 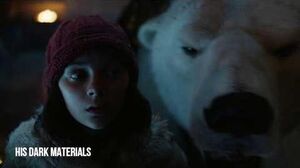 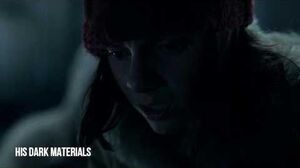 Retrieved from "https://villains.fandom.com/wiki/Iofur_Raknison?oldid=3703228"
Community content is available under CC-BY-SA unless otherwise noted.