Head of the Kujan Family

Member of the Seven Stars
Officer of the Arianrhod Fleet

Enforcer
Iok Kujan is one of the commanders of the Arianrhod Fleet under Rustal Elion and the secondary antagonist of Season 2 of Mobile Suit Gundam IRON-BLOODED ORPHANS. He is the head of the Kujan Family and thus a member of the Seven Stars, as well as Rustal Elion's right-hand man.

He is voiced by Nobunaga Shimazaki in the original Japanese version and Grant George in the English dub.

Later, Iok, Rustal and the rest of the Arianrhod Fleet showed up during the battle between Tekkadan and the Dawn Horizon Corps. Iok was one of the pilots sent out by Rustal to capture the Dawn Horizon Corps' leader Sandoval Reuters before McGillis and his Tekkadan allies could to deny McGillis the political victory. However, the Tekkadan pilot Mikazuki Augus managed to capture Sandoval first before any Arianrhod pilots could.

Later, after he and Rustal received intel that McGillis was on Mars with Tekkadan unearthing what was likely a Mobile Armor, Iok was sent to investigate.

Iok and his team confronted McGillis and Tekkadan as they were surveying the newly unearthed Mobile Suit, and accused McGillis of intending to awaken the Mobile Armor so he could defeat it and earn an Order of the Seven Stars. However, despite McGillis' warnings, Iok got too close to the Mobile Armor in his Mobile Suit and accidentally reawakened it. After the Mobile Armor decimated Iok's men, a distraught Iok attempted to attack the Mobile Suit to avenge his men's deaths, but was stopped by Julieta Juris. Nevertheless, Iok managed to unwittingly foil Tekkadan's planned ambush on the Mobile Armor by attacking it and diverting it off the course from where Tekkadan had set up their trap. Despite Iok's incompetence, Tekkadan was able to stop the Mobile Suit thanks to Mikazuki in Gundam Barbatos Lupus, though Mikazuki's Gundam was heavily damaged as a result.

Later, at a Seven Stars meeting to discuss the incident, Iok leveled his accusations against McGillis for intentionally reawakening the Mobile Armor, but McGillis refuted him and pointed out that it was Iok who awakened the Mobile Armor in the first place. The other Seven Stars commended McGillis for how he resolved the incident, while Rustal Elion stayed silent. After the meeting, Iok asked Rustal why he didn't speak up against McGillis in the meeting, to which Rustal answered that because of Iok's blunders he had nothing to accuse McGillis on, scolding Iok for his recklessness.

Determined to avenge his failure, Iok established ties with Jasley Donomikals, second-in-command of Teiwaz, and was informed by him of a Turbine transport carrying an illegal Dainsleif weapon. Iok's forces intercepted the transport and the cargo it was carrying and used it as justification to declare the Turbines of Teiwaz an illegal organization. Because of this, the Turbines were forced to sever their connections with Teiwaz and cease being a Teiwaz subsidiary.

Iok and his fleet then went out to attack the Turbines and put an end to the organization. The Turbines fired a signal requesting a peaceful surrender, but Iok ignored the signal and ordered his forces to fire Dainsleifs at the Turbine ship and the escape ships transporting civilians from it. However, just in time, the Tekkadan forces showed up to guard the transports as they were fleeing, just as Naze Turbine, the sole crew member left aboard the Turbine ship, made a suicide run on Iok's fleet and took out one of his ships.

Though Iok had made a deal with Jasley to aid them in battle against Tekkadan, Rustal Elion made a deal with McMurdo Barriston, head of Teiwaz, to prevent Iok from assisting Jasley in exchange for not speaking up about the Turbine incident. For his reckless assault on the Turbines, Iok was placed under house arrest.

However, when McGillis Fareed launched his coup against Gjallarhorn with assistance from Tekkadan, Iok was released to assist in suppressing the coup. During the final battle at Tekkadan's Mars base, Iok attacked the Tekkadan forces holding off Gjallarhorn while most of Tekkadan's members evacuated through the underground tunnels, and was ultimately killed when Akihiro Altland crushed him inside of his Mobile Suit. 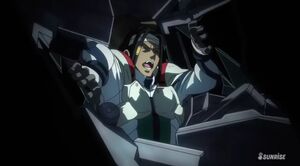 Iok's death.
Add a photo to this gallery

Retrieved from "https://villains.fandom.com/wiki/Iok_Kujan?oldid=3848155"
Community content is available under CC-BY-SA unless otherwise noted.