Underboss of the Tarasov crime family

Using his father's wealth to enjoy a luxurious lifestyle.

He is the arrogant and foolish son of Viggo Tarasov, the head of the Tarasov Crime Family. He is the one who set the events of the series in motion by killing John's beloved dog Daisy shortly after the passing of John's wife Helen.

He was portrayed by Alfie Allen, who also played Theon Greyjoy in Game of Thrones.

John meets Iosef on a random encounter on a gas station a few days after the death of John's wife. Iosef expresses his interest in John's car and asks him how much he wants for it, but John tells him that the car is not for sale. At night, Iosef and a few of his men break into John's house, where they beat up John and steal his car, right after Iosef kills John's pet puppy Daisy. John is horrified by this because Daisy was the last present of his deceased wife and angrily vows to avenge his dog's death by killing Iosef.

Iosef tries to get John's car modified by Aurelio, but Aurelio refuses to do so after learning that Iosef stole it from John after killing Daisy. Disgusted by this, Aurelio angrily punches Iosef for this before throwing him out. A few hours later, Aurelio gets a phone call from Viggo Tarasov, who demands to know why Aurelio has hit his son. When Aurelio tells him what Iosef did to John and his dog, Viggo is clearly shocked by this, realizing that John is intending to kill Iosef for killing Daisy.

As such, Viggo angrily berates Iosef for provoking John and punches him twice in the stomach for it, but Iosef refuses to care, attempting to convince his father to give him a chance to finish off John only to be swiftly dimissed and warned by Viggo, that John will eventually come for him and kill him. Viggo initially attempts to reason out John out of getting revenge but to no avail in which the latter silently refuses which leds to Viggo in sending his 12-man hit squad to John's house to kill him only for John to successfully eliminate Viggo's 12-man hit squad, which resulted to Viggo in placing a bounty on Wick's head, which caused some of the Continental's assassins to hunt down Wick, amongst them being Marcus and Ms. Perkins. Meanwhile, Viggo had Iosef secured at his nightclub, the Red Circle with Iosef's chief of security, Kirill and his henchmen protecting him.

Later, John manages to locate Iosef inside a club. He enters and begins taking out Iosef's henchmen but is not able to kill Iosef himself due to being held off by Viggo's head of security. In the end, John manages to capture Viggo Tarasov and questions him about his son's whereabouts. Viggo reluctantly tells John where to find his son.

After finding out where Iosef is hidden, John travels to the safehouse and takes out a friend of Iosef and all of the guards. Two bodyguards attempt to flee with Iosef by car, but the two are shot and the cars are blown up. Iosef tries to run but gets shot in the stomach. Injured, he sinks to the floor while John approaches. Iosef tries to save himself by convincing John that it was "just a f-ckin' dog" he just killed, but John angrily ignores this and instead shoots Iosef in the head, killing him and avenging Daisy's death for good. Viggo would later join his son in death after a brief fight with John. 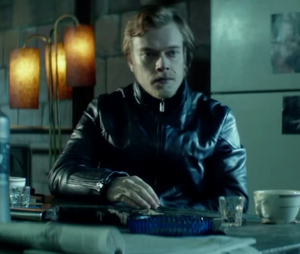 Iosef being confronted by his father. 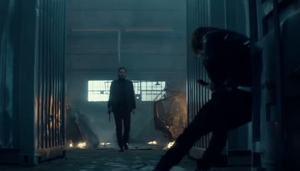 A wounded Iosef getting cornered by John moments before his death.
Add a photo to this gallery

Retrieved from "https://villains.fandom.com/wiki/Iosef_Tarasov?oldid=4338154"
Community content is available under CC-BY-SA unless otherwise noted.