Punishing those who break the rules.

Ira Gamagori is one of the main characters in Kill la Kill. He is one of the Student Council's Elite Four and is the leader of Honnoji Academy's disciplinary committee.

Ira originally appears as an antagonist in the first half of the series, but becomes a neutral character by episode 17.

He was voiced by Tetsu Inada in Japanese and Patrick Seitz in English.

Gamagōri is a large, muscular young man who has a darker-toned complexion and short blonde hair. His eyebrows are noticeably thick and he wears a pair of small gold earrings in his enlarged earlobes

As chair of the disciplinary committee, Ira Gamagori is usually shown to be serious and imposing, intimidating those under his authority and bearing no tolerance for foolishness or rule-breaking. He is also shown to be immensely loyal to Satsuki Kiryūin, and as such, Gamagori is considered as her enforcer and right-hand man. 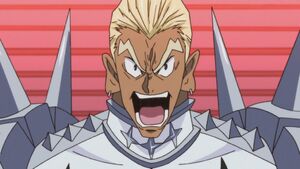 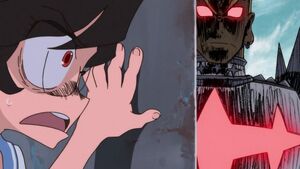 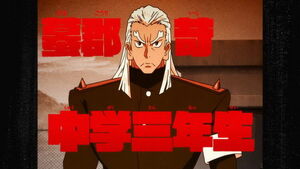 Ira Gamagori before meeting Satsuki and enrolling in Honnoji Academy