Prevent others from getting in her way (both failed).
Acquire all knowledge in the universe with The Crystal Skull (succeeded, but backfired)

Irina Spalko (Russian: Ирина Спалько; Ukrainian: Ірина Спалко) is the main antagonist of the 2008 action-adventure film Indiana Jones and the Kingdom of the Crystal Skull, the fourth installment of the Indiana Jones film series.

She is a highly skilled Soviet Agent who acquires artifacts for the Soviet Union. Interested on psychic warfare, Spalko was tasked by the late Joseph Stalin to find the Crystal Skull of Akator and deliver it back to the Temple of Akator in South America.

She was portrayed by Cate Blanchett, who also played Marissa Wiegler in Hanna, Penelope in Family Guy, Lady Tremaine in the 2015 Cinderella live-action remake and Hela in Thor: Ragnarok.

A Soviet agent born in a small mountain village in the eastern regions of the Ukrainian Soviet Socialist Republic, she was believed by those in her village to be a witch as her apparent psychic powers began to manifest themselves through animal control.

An impressed Joseph Stalin inducted her into researching psychic warfare, awarding her with the Order of Lenin three times. She is skilled in fencing and hand-to-hand combat and is Indiana's main antagonist as she brings the crystal skull to Akator to utilize the power there for her country's militant purposes. Ironically, her desire for knowledge proved her undoing when the crystal skull entity grants her desire to know everything, and an alien figure emerges and indicates that Spalko is too dangerous to remain alive. Her mind overloads and she disintegrates and her ashes scatter into the portal along with her felons. 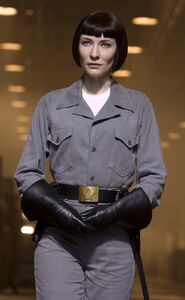 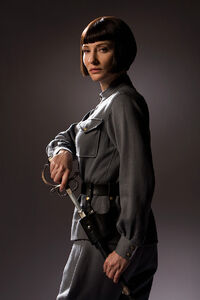 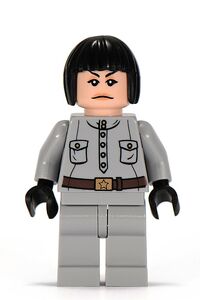 A Lego figure of Irina Spalko. 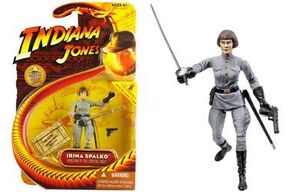 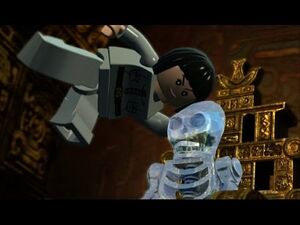