Conquer the universe (succeeded for a while, but failed).

Alien Imperialists
The Irken Empire is the main antagonistic faction of Invader Zim and the 2019 Netflix film Invader Zim: Enter the Florpus. This consist of a race of insectoid hominid organisms called Irkens. Ever since their home planet, Irk, was accidentally almost destroyed by Zim, many parts of the race live on the gigantic ship called The Massive.

Irken society is based on height. The shortest are subjected to harsh labors while the taller Irkens are given easy jobs and are treated with respect. The tallest Irken of each generation becomes the leader no matter their social status or qualifications. This rank is called the Almighty Tallest. If the two Irkens of the same generation are the same height they rule together. Such is the case of Tallest Red and Tallest Purple.

The ultimate goal of the Irken Empire is to dominate the universe. They do this by sending a select Irken, who has been given the title Invader, to an enemy planet. Once on the planet they will blend into the inhabitant's society and learn their weaknesses with the help of a Standard Information Retrieval or S.I.R unit. Once the weaknesses are learned, the Invader informs the Almighty Tallest and they send the large Armada to wipe out the planet or enslave it.

In Invader Zim: Enter the Florpus, the Irken Empire travel in a straight line around the galaxy within the large armada to conquer the universe. When Zim reality-warps the Earth using the bracelets and Mini Moose, the Earth appears in the straight line which the Irken Armada travel, accidentally summoning the Florpus. The Tallest decide to blow up the Earth instead of going in a different direction despite warnings about the Florpus. When the Earth is saved by the Membrane Family, the Irken Armada accidentally and idiotically enter the Florpus, implicating that the entire fleet is destroyed in a hell-like dimension for eternity, thus ending the conquering of worlds for good. That said, it's currently unknown what has become of the already conquered worlds by the Irken or if any remainders of the Empire are still active.

The Irken symbol in black 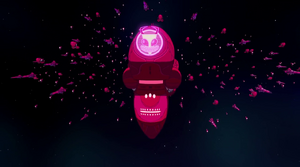 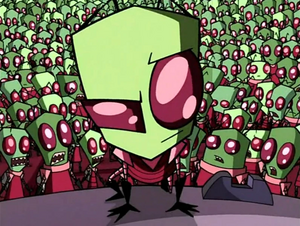 Crowd of Irkens
Add a photo to this gallery

Retrieved from "https://villains.fandom.com/wiki/Irken_Empire?oldid=4023748"
Community content is available under CC-BY-SA unless otherwise noted.