Member of the Assassins of the Fang

Take her revenge on the queen.

Irma is a member of the Queen's death squad (founded by Queen Aldra), the Assassins of the Fang. Few people even know that she exists. Irma adopts an emotionless attitude due to her early training alongside Echidna. Her mission is to eliminate certain contestants from the Queen's Blade Tournament.

Her attire consists of a non-standard uniform version used by the Queen's personal death squad: The Assassins of Fang. Compared to the standard uniform, Irma's outfit is more revealing, for example her torso armor is cut higher, exposing the bottom half of her breasts.

Irma is a cold, callous woman who rarely shows emotions, but when surprised or pressed over the edge she will lose her cool. She is resourceful and willing to use cruel tactics such as taking hostages, torture, and threats to complete her tasks. However, she shows an emotional weakness towards cats, as she secretly cares about them.

Irma has been trained by Echidna to be an assassin. She favors an off-hand fighting style in battle, using both her dagger and her sword simultaneously. She wields both weapons to a master's degree, and uses her speed, agility, and stealth to her advantage. As Echidna's pupil, she can also use her Black Rose technique: parrying an enemy's attack while attacking with her dagger. Irma will also uses throwing knives at times when she's in a ranged fight. Finally, Irma is known to be a master of disguise and is able to easily blend in as a typical commoner, servant, etc.

Irma is a young woman who is the leader of the Assassins of the Fang, the Queen's secret police charged with taking out certain contenders who might be a threat to the Continent. She has a cold and emotionless personality, and is a highly-skilled fighter who uses stealth to her advantage. In the original game's story, she is ordered by Aldra to kill Leina, but changes her mind when she faces her, and tries to kill the Queen instead during the tournament; however, she is soundly defeated and sentenced to death, only to be rescued by Echidna. In the anime, it is revealed that Irma was taken in as Echidna's disciple after she lost her brother in a dispute, and seeks revenge on the Queen by killing her. However, a broken promise led Irma to bear a grudge against her former teacher. She is armed with twin daggers. 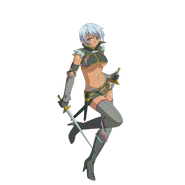 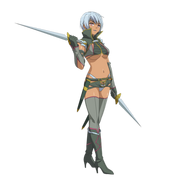 Retrieved from "https://villains.fandom.com/wiki/Irma?oldid=3774438"
Community content is available under CC-BY-SA unless otherwise noted.