Prevent any Chosen Ones from reaching Anor Londo.

The Iron Golem is a minor antagonist in Dark Souls. It is a massive humanoid suit of armor that guards Sen's Fortress.

Before his permanent sacrifice to link the First Flame, Gwyn built Sen's Fortress as the testing ground for Chosen Undeads who have rung the Bells of Awakening to test their strength before entering Anor Londo to retrieve the Lordvessel. At the top of the fortress was a mighty golem created to serve as the final test, brought to life using a soul crafted from a bone of an Everlasting Dragon. Before the playable Chosen Undead was released out of the Northern Undead Asylum, the Iron Golem killed thousands of Chosen Undeads, all for the sake of guarding the entrance to Anor Londo.

The Iron Golem can be found at the top of Sen's Fortress, in a round flat area to the side of the tower with the Giant on it. Defeating the Giant first is recommended as it can through large firebombs into the Iron Golem's arena if ignored. While very slow, the Iron Golem is a mighty foe given its large healthbar, strong defenses, and a barrage of powerful attacks it can unleash from its axe. Not only can it use its axe to swing or slam at the player, but it can also slash at the air to send a sharp projectile through the wind at the player. It can also stomp or use its other hand to punch the ground or grab the player, throwing them to the ground in front of it. This can be lethal as the golem can possibly throw the player off the platform and to their death.

Fortunately, the Iron Golem can be staggered easily given its size and weight, as enough hits to its legs causes it to lose balance. Hitting it some more makes the golem fall down, leaving it exposed for about 15 seconds. If it loses its balance with its back directly at the edge of the platform, it may plummet off and fall to its death, ending the battle regardless of how much health it has left. Defeating it rewards the player with its core and 40,000 souls. After defeating the golem, a yellow Resonance Ring appears in the middle of the arena. Interacting with it summons Batwing Demons that take the player to Anor Londo, continuing their quest. 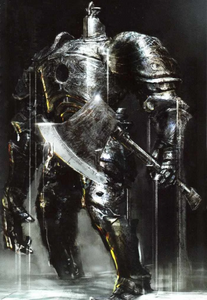 Concept art of the Iron Golem. 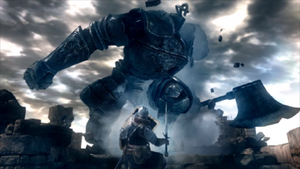 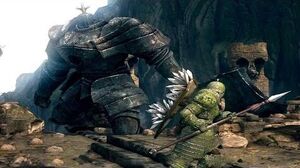 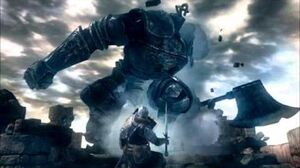