Ironclad, also known as Mike Steel is a supervillain from Marvel comics who is one of the four members of the U-Foes. has taken on Captain America, Hulk and other prominent heroes.

Mike Steel was an engineer, a scientist, and a pilot before gaining his superhuman powers. With his teammates, he attempted to duplicate the original rocket flight of the Fantastic Four through a cosmic ray belt, and gained superhuman powers just as they did. His team then first battled the Hulk, although during the battle Ironclad lost control of his powers and sank into the ground. Later, he rescued his teammate X-Ray and was reunited with the U-Foes. They again battled the Hulk and this time defeated him. In triumph, they exhibited the captive Bruce Banner on national television. However, Banner was freed by Rick Jones, Betty Ross, and the alien Bereet, and Banner transformed into the Hulk and defeated the U-Foes. With the U-Foes, Ironclad later escaped a special government prison, but was accidentally "deflected" by team leader Vector into the "Crossroads" dimension. There, he battled the Hulk and defeated him with the help of the alien "Puffball Collective," though he became trapped in a dimension of quicksand. Ironclad later escaped back to the "Crossroads" dimension, and with the U-Foes he escaped back to Earth through a dimensional warp unintentionally opened by the Mutant Charles Little Sky. The U-Foes battled the Avengers and Puma, and Ironclad was defeated by Captain America and Gilgamesh.

Some time later, alongside other superhuman criminals, Ironclad attempted to escape from the Vault, and battled the Avengers and Freedom Force. Alongside Electro, Ironclad sided with Thunderball against Venom for leadership of the convicts. Ironclad was later freed from the Vault, and with teammates Vapor and X-Ray, Ironclad attacked the Avengers West Coast, mistakenly believing they had killed Vector. Vector then reappeared alive and well, and led his teammates in a strategic retreat. With the U-Foes, Ironclad later attacked a New York hospital in search of Charles Little Sky (who was now known as Portal), where they battled Darkhawk, Daredevil, and Captain America.

Mike was one of the 142 superhumans who registered as part of the Super-Human Registration Act.

Though a registered hero, Ironclad later joined the Hood's criminal organization who planned to take advantage of the split in the superhero community caused by the Superhuman Registration Act.

Due to Ironclads Exposure to radiation, he can lift somewhere up to 80 to 90 tons,making him a class 90.

Ironclad is very durable to blunt force and high temperatures, he takes blows from the hulk who is a 100 tonner,proving that he can actually fight with the hulk. and he can also resist -75 to 800 degrees of Fahrenheit.

Iron clad can alter his mass and weight, he could either loom in air of be as heavy as a building. 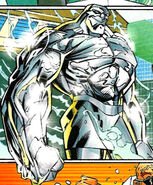 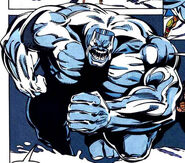 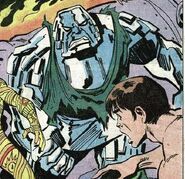 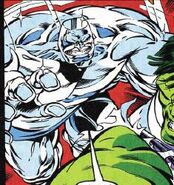 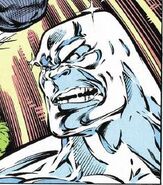 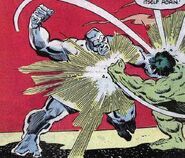 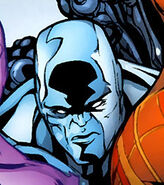 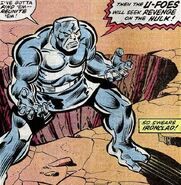 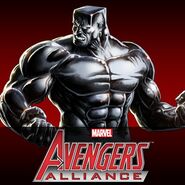 Retrieved from "https://villains.fandom.com/wiki/Ironclad?oldid=3537652"
Community content is available under CC-BY-SA unless otherwise noted.