Live until end of the stage.

Irresponsible Dad is one of the playable characters that was introduced in the browser game Happy Wheels and one of the icons of the game. He is the third character to addition to the game and he is most popular character in the game.

In the game, Irresponsible Dad appears in numerous counts of stages. In this stages, he rides his bicycle and he tries to win the stages. There are a lot of Irresponsible Dad exclusive stages like "BMX Park II" and "Speed bridge".

The player can control Irresponsible Dad with these buttons:

After ejection, the player can control Irresponsible Dad and his son with these buttons:

In this series, his son is named as Cody.

Irresponsible Dad is a biker who rides a blue bicycle with his son. He has brown hairs and eyes. He wears a green/turquoise mixed shirt, khaki shorts, black belt, black converse shoes, white socks and white helmet.

Irresponsible Dad is a human and he has no superhuman powers.

Irresponsible Dad can be considered as a villain because, as his name suggests, he is an irresponsible father who endangers his son. He brings his son to the dangerous Happy Wheels world, and he does not protect his son, he does not even protect him with a headgear, despite protecting himself with a helmet.

Also, in the series, Jim (Irresponsible Dad) trains his son, Cody, about cycling and he lets his son ride by himself without any protection. Eventually, his son impaled by spikes. This can be categorized as an indirect child murder. 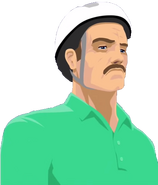 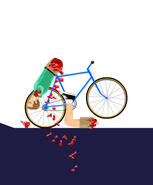 Irresponsible Dad is still alive and even able to ride his bike, despite he lost all of his arms and legs, and bleeding.
Add a photo to this gallery

Retrieved from "https://villains.fandom.com/wiki/Irresponsible_Dad?oldid=3823462"
Community content is available under CC-BY-SA unless otherwise noted.