Working on his novel.

Help Whiterose with destroying 71 E Corp buildings (succeeded).
Kill Santiago and replace him with Dom DiPerrio/Dominique as an FBI mole for the Dark Army by threatening with killing her family (succeeded).

Irving is the secondary antagonist of the third season of the USA Network drama show, Mr. Robot. He is Whiterose's right-hand, and a fixer for the Dark Army who helps them with their plans. It is unknown how he sees the Dark Army and why he even became a member of the group, but it is shown that he is a very big enforcer for the group, doing pretty much everything Whiterose tells him to do, and likes doing the orders just as much. Irving is also shown to be one of the few Dark Army members that seems to truly know who Whiterose is, possibly even knowing what gender Whiterose is.

Being the right-hand of Whiterose, Irving obviously played a part in the huge attack against E Corp, where 71 E Corp buildings blew up, killing thousands and thousands of innocent people. Whiterose's motivation for this was to teach a lesson; Phillip Price and Whiterose once had a luxury meeting, where they talked about a lawsuit against the Washington Power Plant. Price promised to handle the lawsuit, but instead, Angela Moss got to keep the lawsuit. This angered Whiterose. Whiterose also reveals that the only reason Price was promoted as the CEO of E Corp was because she needed someone to look over his Congo power plant, and apparently that was the purpose of the CEO of E Corp before Price; Lester Moore as well, which she later orchestrated the murder of because of him interfering in her plans; something Price also did.

Irving sees Mr. Robot and Elliot investigating Phillip Price's penthouse, and orders them to come with him. He drives them to a barnhouse far away from the urban areas, where he has already ordered the Dark Army FBI mole Santiago to come. Santiago beat down Dom and Darlene, and then drove them to the barn. While Grant is taking care of Elliot, Mr. Robot, and Darlene, Irving takes Santiago and Dom. He grabs an axe. This convinces Santiago to believe that Irving is going to kill Dom. He tries his best to prevent Irving from killing Dom, stating that she can possibly have a lot of valuable information that the Dark Army might need. Irving doesn't really care what Santiago says, and jokingly asks if he believes that Dom would go far into the FBI. Santiago says that she is a rising star, and is only getting better at her job. Irving grabs the axe viciously, which obviously makes Dom even more terrified. Irving tries calming her, requesting that she looks into the air and takes a deep breath while relaxing.

Because of Santiago's attempts of saving Dom being pathetic, Irving brutally stabs and kills him with his axe, stabbing him in his heart. Irving wants her to become the new FBI mole for the Dark Army. Dom is absolutely traumatized at this point, and prompts Irving to kill her, stating that the first thing she will do anyway if he lets her go is arresting him. Obviously, Irving doesn't give up. He says to Dom that she should imagine that Santiago is a family member, while brutally stabbing him multiple times. While not revealed, it is most likely that this was supposed to symbolize that he would kill her family if she wouldn't become an FBI mole. Irving manages to scare her enough to convince her to become an FBI mole.

At the start of the season, Irving seems like a decent guy. He is genuinely nice to Mr. Robot and Tyrell Wellick, especially Tyrell. He likes talking to Tyrell like an old friend, and as the season goes on, Tyrell gets more comfortable with talking about more personal things. His relationship with his children being a touchy subject that he still feels comfortable talking about (granted, not a very long talk about it). Irving explains his own relationship with his children, stating that he used to go home after working and being welcomed by his wife and children. One day, however, his family just left him for basically no reason. With Mr. Robot's relationship, he's slightly more serious. This is most likely because of Tyrell being a manchild, and therefore being easier to talk with about certain things. Out of everyone in the series though, he was probably kindest against Elliot in the few interactions they had. He had a very kind tone whenever talking to him, though it is unknown how their interactions would have changed if their relationship would have been more like that of Tyrell's and Irving's.

Later in the season though, this slowly goes away. Irving states that when discussing with Tyrell about his personal life, he lied about having a family in order to get even more information about Tyrell's personal life to the Dark Army. This pretty much completely counters any chance they had of an actual friendship, though Tyrell doesn't know that Irving lied to him. The Mr. Robot relationship was less friendly even from the start, but becomes even more hostile later on. At the end of the season, Irving simply doesn't care about Mr. Robot at all anymore. When asking why the Dark Army killed thousands of people by blowing up 71 E Corp buildings, Irving simply orders his henchmen to beat Mr. Robot down. He does give an explanation later, but it's way to cryptic to be an actual reasoning.

Irving is revealed in the last episode to be extremely sadistic, as he blackmails Dom into becoming an FBI mole for the Dark Army while threatening to kill her family if she doesn't become one. The way he does this is especially brutal, stabbing Santiago multiple times with an axe, right at his heart. Irving's psychopathic tendencies have never been shown this much in previous episodes, even though he did show signs of it. When he is at a fast food restaurant, he starts an argument about why he won't be able to get a free milkshake. The cashier tries to keep a straight face, and says that he will redeem it on his next visit. Irving refuses. He then gets a call from Tyrell. He casually asks if Elliot is dead, while looking at the cashier strangely. At this point, she simply can't keep a straight face and is completely shocked. 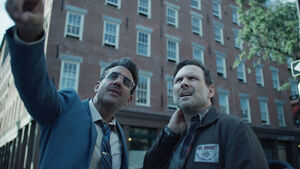 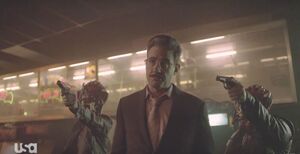 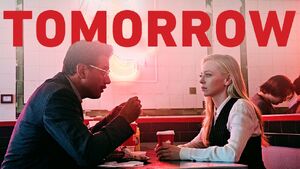 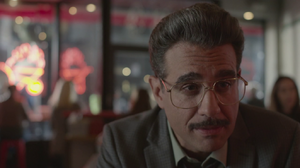 Irving having a conversation with Angela Moss while eating ribs for breakfast.

Irving right after killing Santiago.
Add a photo to this gallery

Retrieved from "https://villains.fandom.com/wiki/Irving_(Mr._Robot)?oldid=3508222"
Community content is available under CC-BY-SA unless otherwise noted.