Worshiping He Who Walks Behind the Rows.

Kill all the adults in Gatlin (succeeded).

Sacrifice Burt and Vicky (outcome varies on adaption).
Forever worship He Who Walks Behind the Rows.

He was portrayed by John Franklin in the 1984 adaptation, and Preston Bailey in the 2009 remake.

Not much is known about Isaac in his earlier years. A child named Job in the film states that when Isaac was younger that he was a preacher and everyone looked up to him, although Job and his sister Sarah found Isaac to be rather strange than interesting.

Isaac was also responsible for the the mass murder of the citizens of Gatlin as he spread his religious influence into the children of the town. Isaac converts the town into a "holy" ground where nobody can enter and no one can leave, even the children that live in it. Isaac would then assert his control over the children, including his enforcer Malachai. Threatening them that if they disobey him, then they would sinning against "him".

A year after the slaughter of the adults, Isaac gets informed that two people were possibly going near the town. Knowing that these two people could pass through, Isaac prepares the children for the sacrifice of the two people.

The two people, who are named Vicky and Burt enter the town where they observe the town being quite empty and abandoned. When Burt investigates the town to try to look for help, Vicky gets captured by Malachai, who he brought to Isaac. Despite this, Isaac tells Malachai that "he is displeased", which leads to Malachai questioning Isaac's leadership. This leads to Malachai betraying Isaac and puts him in the place of Vicky to sacrifice.

Later that night, Isaac senses the presence of He Who Walks Behind the Rows. Despite his pleas, Isaac is presumably killed. However, unbeknownst to Malachai, Isaac is possessed by Him, and kills Malachai. Isaac is not seen or heard of again.

Children of the Corn 666: Isaac's Return

It is revealed that Isaac did not die from the events from the first film, but instead was put into a coma for over nineteen years. Once he wakes up, he is determined to bring back the forgotten religion and bring back He Who Walks Behind the Rows. It is also revealed that Isaac has a son named Matt, and hopes that his son can pass on the legacy to him as the next prophet.

Isaac is confronted by Gabriel, who was the firstborn of the children, since his birthright was denied due to Isaac having favor for his son instead of him. Gabriel uses his power against Isaac and reveals himself to be He Who Walks Behind the Rows, where he then impales Isaac to the floor, and kills him.

In the 2009 remake, Isaac is nine years old and the cult leader of the children. In the film, Isaac, in the corn, notices two people heading toward Gatlin along with his eighteen year old second-in-command, Malachai. Isaac goes back to Gatlin to warn the children of the incoming of the outlanders, saying that they are like the "blue man" who was a police officer who was sacrificed for trying to stop the children in the town massacre.

When Isaac notices that Vicky is later left by herself in Burt's car while Burt is investigating, he has the children attack Vicky and Malachai later kills her in the attack. When Burt rushes outside to check his dead wife, he is confronted by the children. Isaac then taunts Burt by throwing a small knife into his arm. However, when Burt escapes, Isaac confronts Malachai and it is revealed that Malachai angered the god-like entity He Who Walks Behind the Rows by killing Joseph (a child who tried escaping) in the corn. Isaac then makes Malachai pray to show his loyalty to the the religion.

At the end of the film, Burt is killed by He Who Walks Behind the Rows. However, Isaac reveals to the children that due to their inability to kill Burt, the age of sacrifice has been lowered from ninteen to eighteen (previously was lowered from twenty to nineteen due to their failure in killing of the town police officer, who they call "the blue man"). Which leads to Malachai and the others who are eighteen to walk into the cornfields, where they offer themsevles to Him.

In most portrayals, Isaac usually sees himself as someone above the rest of the children, due to apparently enforcing what He Who Walks Behind the Rows' commands. Due to this, Isaac usually is not afraid to confront his opposers, even ones that are much larger than him. Isaac expects everyone of the children to listen to him as he threatens that if they do not, He will punish them all in very brutal ways.

Isaac only seems to be extremely intimidated by He Who Walks Behind the Rows himself, as he has stated that just by looking at him would lead to his demise. When he is on a cross in the cornfield, he fearfully attempts to plea with Him, saying that he was loyal, although this fails. 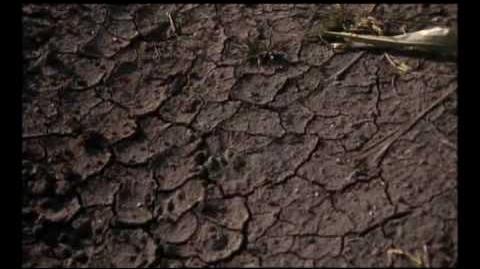 Children of the Corn (pt.1)