Create an army of followers

Kill Lucius for destroying his plans (all failed)

Isaac Gilmore is the main antagonist of Lucius II: The Prophecy. He is one of the many sons of Lucifer and is the half-brother of his rival Lucius Wagner.

Isaac was born at St. Benedict Memorial Hospital, the same hospital that Lucius was born in. Upon reaching adulthood, he set out to fulfill the religious prophecy as described in the Book of Revelations.

After burning the corn fields and making a meteor fall to earth to sound the first and second trumpets, Lucius revealed himself to Isaac by poisoning the water supply which sounded the third trumpet.

At the locust farm, Lucius finds Isaac who is in the process of supernaturally torturing innocent people. Lucius (knowing that Isaac's weakness was salt) releases the locusts to sound the fifth trumpet and threw a container of salt at Isaac, who then burst into flames.

Later, he reappeared supernaturally resurrected on top of a building in Ludlow where he tried to kill Lucius with fireballs, but Lucius defeated him once again with a shotgun with bullets containing salt, apparently destroying him for good. 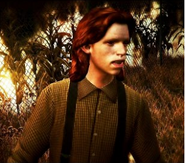 Add a photo to this gallery
Retrieved from "https://villains.fandom.com/wiki/Isaac_Gilmore?oldid=4287834"
Community content is available under CC-BY-SA unless otherwise noted.