Founder and Director of Deus.Ex.Machina Industries

Bring about the downfall of the laws of the existence.
Lead all Spirits to insanity to become the Inverse Spirit of Origin.
Crush the Ratatoskr resistance.
Defeat his economic rivals.
Defeat his rival, Elliot Woodman.
Kill or keep Mio Takamiya for himself.
Kill God and rule the existence as the Supreme Deity to remake the multiverse in his image.
Create an existence where only mages rule as the master race.
Wipe out all humans and enslave the survivors to build his new empire.
Kill Shido Itsuka and his family.

Isaac Ray Peram Westcott, also known as Ike or Isaac "Zaak" Westcott, is the main antagonist of the Android/IOS Chinese mobile game Date A Live: Spirit Pledge which follows the canon story but changing the plot in major details to create an alternative history.

Isaac Westcott is the totalitarian founder and corrupt managing director of Deus.Ex.Machina Industries that rules over Europe and part of Asia's continent. Based in the original Isaac Westcott from the novel series, this non-canon version of Westcott plays him straight as cold-hearted sociopath that loves no one but himself and by a far point, the most evil non-canon incarnation of the evil nihilist director so far.

As the ruthless managing director of DEM Industries, Westcott controls Europe and uses his power and influence in the world to inflict pain, wage wars and study Spirits in order to become the Second Spirit of Origin to take down God and his laws, keep Mio Takamiya for himself and rule the multiverse over a tortured mankind where mages rules as the superior race.

Westcott is not only a genius by nature but personifies the stereotype of a sociopathic narcissist who loves only himself and sees even his friends and comrades as mere tools to fulfill his goals. Westcott is not above installing explosives Realizers inside of his offices to get rid of witnesses and those who hesitate to obey the orders of DEM.

By his early actions, he is displayed as sadomasocist and cruel and even insane as he shows no importance who will win in a war as long his machinations inflict pain and show to be useful for his own purposes. He sees Spirits not as a living beings, but as an object to be researched—including himself as he claims that the supernatural is the most beautiful thing that connects the world to mysterious forces of another dimension.

He has little respect or regard for most others, and was even willing to turn his own men (who were not aware of his plans) into living bombs as well as living weapons such as removing their brains and turning them into his puppets.

Westcott is a megalomaniac and egocentric genius who firmly believes in the Nazis' misinterpretation of Nietzsche's Übermensch (over-man) concept where a race of superior beings are destined to rule the normal ones. Believing mages to be such men with rights enough to rule over the power of Gods.

Often seen smirking, Westcott is a cool, collected, yet sarcastic and arrogant man who plays himself off as being extremely intelligent. Also, much like the rest of his allies, Westcott belittles Asians, and thinks of them as nothing more than insects, mainly their armed forces, the AST, for not using brutal methods to achieve their needs.

Westcott first shows up when Tohka is rescued by Shido Itsuka. In the hopes of capturing the Spirits, Westcott dispatched waves and waves of teenagers and children who where abducted by DEM (after the former killed their families and blamed the Spirits for it) to battlefields against the Spirits. This, however, turned out to be suicidal operations as all women and girls died on the war. To keep the Wizards from DEM and AST in silence, Westcott, in accordance with other nations, approved to wipe out their identities and turn all military of Anti-Spirit Teams of the entire world into mindless puppets that will commit suicide in impossible missions.

When the battle between Origami Tobiichi and Kotori Itsuka was over, Westcott set his eyes on Tohka Yatogami and dispatched Ellen Mira Mathers and James A. Paddington to Irubi island and ordered the squad to capture Tohka and get rid of all evidences in the island, which turned out to be a failure as Ratatoskr and the heroes managed to defeat the horde of Bandersnatchs.

A month later, Westcott along with Jessica Bailey launched a full-out assault against the Tenou event to capture Tohka and killed a hundreds innocent civilians and young students during the battle with the Spirits before Ellen could capture Tohka and bring her to DEM building of Tenguu City. In the DEM building, Westcott subjugted her to extreme psychological torture through interrogation and drugs but nothing made her go into Inverse Form, however, when the thought of Shido came to Tohka's head, Westcott noticed that killing the hero in front of her would work.

After Shido, alongside Miku Izayoi arrived at the chamber of DEM building, Westcott had Ellen impaling Shido with her sword while she was suffering electric torture. This caused Tohka to transform into Inverse Tohka Yatogami, who almost killed Westcott in the process, however, Ellen saved him before retreating to strike back next time.

Date A Live x To Aru Majutsu no Index crossover 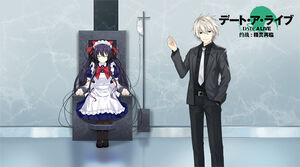 Westcott with Tohka in Spirit Pledge.

Retrieved from "https://villains.fandom.com/wiki/Isaac_Ray_Peram_Westcott_(Spirit_Pledge)?oldid=3501548"
Community content is available under CC-BY-SA unless otherwise noted.