Start a Wiki
Isabel Rochev is a villain who appears in the TV series Arrow, based on the DC comic book hero Green Arrow. She is a member of the Blood Cult and the partner of Slade Wilson. She serves as the tertiary turned true secondary antagonist of the show's second season. She is portrayed by Summer Glau.

==
History == Isabel Rochev was born in Moscow and raised there for nine years until she was adopted by an American family. During her teens she went to business school and eventually started an internship at Queen Consolidated and started an affair with CEO Robert Queen (father of Oliver Queen/Green Arrow). The affair went on until the two decided to leave together. But when Robert's step-daughter Thea (in reality the daughter of Malcolm Merlyn) fell of her horse, he left to check on her. The next day Isabel heard her internship was cancelled and Robert never spoke to her again.

Still resentful of Robert Queen, Isabel became the partner of Slade Wilson, who trained her in martial arts. A process which according to her, almost killed her. After the Undertaking and Oliver leaving, she was planted in Queen Consolidated in order to draw Oliver back.

Isabel started a hostile takeover of Queen Consolidated, able to buy many shares. Oliver and her however become equal partners and Oliver is warned by his mother Moira not to trust her.

Eventually Isabel becomes more of a thorn in Oliver's sight, but during a trip to Moscow, Oliver gives in to his desires and sleeps with Isabel, unaware of her previous affair with his father. 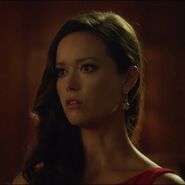 Add a photo to this gallery
Retrieved from "https://villains.fandom.com/wiki/Isabel_Rochev?oldid=1009385"
Community content is available under CC-BY-SA unless otherwise noted.